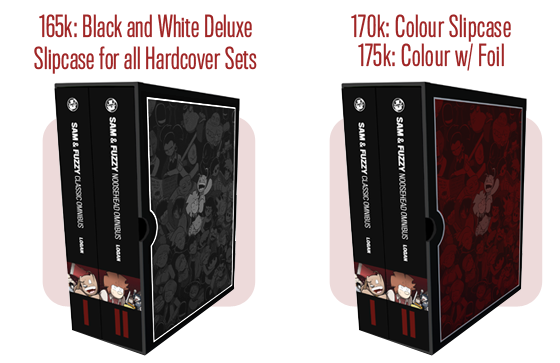 Well, this is it... the final five days of the Sam and Fuzzy kickstarter! I have been endlessly astonished by how well this project is gone. But I know everyone is really hoping we can hit some of those truly nuts stretch goals... so here is what I have come up with to help.

First of all... I have committed to more MONOLITHS! That means there are finally more hardcover omnibuses that come with an original illustration and personalized message in the inside. There are a few different kinds to choose from... black and white illustrations, spot-colour illustrations, and a random batch of cosplaying Fuzzys that I drew at Comic-Con. They've all been sold out until now, so we'll see how long these extra ones last!

Second... a few of the higher end tiers have been freed up as a result of people switching tiers. The original back cover Noosehead art is up for grabs, as is one of the completionist tiers that includes copies of my two long out-of-print minibooks.

And third... I have made a bunch of original marker illustrations! You can click the image below to view them all. If you see one you'd like to own, each one is available for a $100 pledge or pledge add-on. (Or, if you have backed at the Commissioner tier, you can get one of them as your included commission.) Just email me if you'd like to buy any of 'em.


Kickstarter Marker Originals! (Click to view 'em all at a larger size)

I am pretty happy with how all these turned out. I got to put a lot more time into them than I do with my usual sketch-off pieces, and it was nice to get to work with more characters and more colours!

And of course, if you like the the look of these drawings but would prefer to get a custom new one of a different idea... you can do exactly that, by nabbing the "COMMISSIONER" tier! It includes a drawing of this style, but drawn especially for you, featuring whatever characters and themes you'd like.

All right. Back to work for me. Thanks again, everyone, for all your support! We had one shot at making these books, and you are really turning them into something incredible.