To Be Or Not To Be

Hey! Remember To Be Or Not To Be, my buddy Ryan's choose-your-own-adventure-styled exploration of Hamlet? Remember how I illustrated two of the book's possible endings? Well, I think the time has come to part with the originals. So, I'm auctioning one of them off!

The Auction is now live! 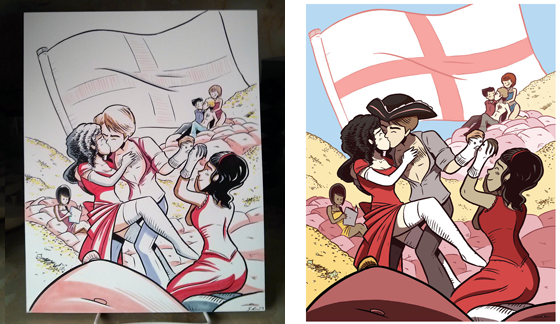 In this ending, Hamlet conquers a pirate ship, moves to England, and lives the rest of his life in fiscal and sexual opulence. As far as endings go, it is pretty solid. I couldn't decide how much to charge for the original, so I'm going to put it on ebay and let the people decide.

The auction includes both the original pen-and-ink drawing and a print of the digitally coloured final art. Go team!

Sam and Fuzzy Q & A: Post-Spooktimes Edition
Got a question you want answered? Just drop me an email with "Q & A" in the subject line!

"Apologies if you've covered this before, but approximately when will the omnibus be available to purchase? I want to buy it as a Christmas gift....to myself." -Cynthia

Alas, though the Omnibus will be available for non-backers to buy, it won't be until early next year. Right now we're expecting to receive the finished books towards the end of December. (And of course, we'll need to get them out to all the backers first before we put the remaining copies up for sale!)

In other words, they'll be available soon enough, but you'll probably want to think of it as a late Christmas present to yourself. (Or alternately, a really, really early one.)

"Are we going to find out why Brain hasn't double-crossed Hazel and wiped her memory clean yet?" -Agni

Hazel and Brain have a very long and complicated working relationship based around some particular shared goals. We'll learn more about it in the future!

"WHAT ARE YOU DOING TO MY FANGIRL FEEEEEELLZZZ?!?!?! Seriously, what are you doin to poor fuzzy." -Rhi

Writers and readers have very different relationships with their favourite characters! Readers never want to see anything really bad happen to them. Writers have to make bad things happen to them. Sometimes very bad! I'm sorry. I hope we can still be friends, even as I murder and abuse all your precious loved ones.

That's a wrap for this week! Come back on Monday for more feelings.

Book Club members! I am super aware (as you may be too) that you guys are overdue for bonus pack 3. As you can imagine, working on all the kickstarter stuff didn't leave me with a lot of time to assemble new bonuses. So here is my back-up plan: I'm going to merge bonus pack 3 into bonus pack 4, creating one doubled-up insane-size bonus pack for December.

To that end, I'd like your opinion on a thing or two! In the past, I've often included new desktop backgrounds. This time around, in addition to some new desktops, would you like it if I also included some mobile-device-shaped backgrounds? (That is to say, some backgrounds that are vertically oriented, rather than horizontal.) And are there any kind of (digital) rewards you would dig? (That are not extra comics; I love you but if I had that kind of time I'd update the regular comic more often!) Let me know!