Hooray! We hit our first goal on my Patreon over the weekend! That means, starting now, all Patreon backers will get a trio of digital PDF artbooks: the previously released Art of Fate and Superhero Sketch-Off collections, as well as the brand new Videogame Sketch-Off collection! 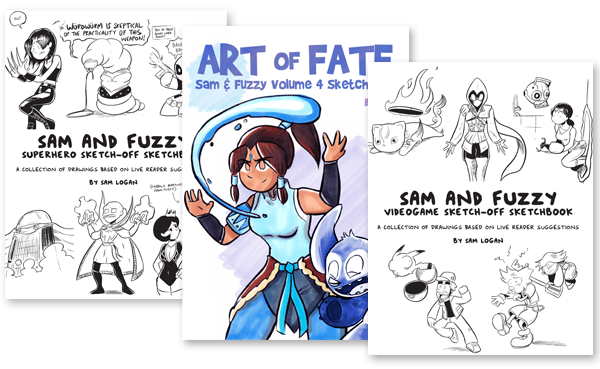 There are a bunch of different bonuses for backing the Sam and Fuzzy patreon at different levels -- including original artwork, a backer-only art blog and a giant "secret art vault" full of backgrounds, commissions, pin-ups, and comics. But these three ebooks are free to all backers, at any level... whether they're die-hards splurging for some of those extra bonuses, or just folks chipping in a buck a month because they like the comic. Any amount helps push us towards to the goal of making more comics, so I'm happy to reward it. Thanks, and enjoy!

"I started reading The Underground RPG and it's great learning about the world of Sam & Fuzzy in more detail.
One thing I've noticed is that though most technology is developed by various underground factions like the Cyborg Mafia and Retron 01 and released by the Committee. This technology is also the reason maintaining the Status Quo is becoming harder.
Was it an oversight by the Committee when they started releasing camera phones and such above ground, or is it one of the few instances of above ground innovation the Committee has found difficult to control?" -Brad

The Committee uses their influence (and control of its member companies) to slow the release of technology on the surface to a pace that they feel will not unduly disturb or frighten surface humans. But they don't attempt to halt technological development entirely. For one thing, doing so would probably be beyond their capabilities. And even if it wasn't... selling new technology is how many Committee members make their fortunes! (As you have probably read in the Underground RPG gamebook!)

Widespread surveillance and camera technology has definitely made enforcing the Status Quo more difficult, and I'm sure (in the world of Sam and Fuzzy) it was invented long before it was available on the surface. But at this point, its simply an idea that's time has come. Think of surface technology as something that consistently lags behind what's available Underground... and what's available Underground right now is nigh-perfect exosuits and functional artificial intelligence.

I'm glad you're enjoying the Underground RPG! I had a lot of fun fleshing out the world and writing all that backstory for all the different species and Committee factions.

"So after reading the this page, I noticed that this is the EXACT SAME reaction that Alexa had when Sam dissappeared for two years. Was this intentional? And if so, does Sam suddenly realize how she felt when he walked into Bunton's after Noosehead? He seemed a little PO'd about it at the time." -Jared

Ha! That is an interesting but totally unintentional parallel. But it's probably just as well. Old Sam isn't being too introspective or self-reflective these days. The irony would probably be lost on him.

"Does Fuzzy know for sure that he isn't a robot? Poked himself with a needle to see if there's blood, or anything like that?" -Nathan

I'm sure he did that after he first met the Buddy Bears! But the question is... when was the last time he did it? HE COULD HAVE BEEN REPLACED BY A ROBOT CLONE AT ANY TIME!

But seriously though, that hasn't happened and Fuzzy is still not a robot. Honest!

Our next comic arrives on Monday. (Or later today, if you are a Patreon backer... bonuses are fun!) I think it's a good one! See you then.

Just a quick note for today, team! But we return on Friday, with a new comic and a new round of Q and A! If you've got any questions you'd like me to answer... about the Sam and Fuzzy comic, the Underground RPG, the new Patreon, or anything else, just drop it in an email with "Q and A" in the subject line. It's what I'm here for!