"Um... did Sin just KILL all the Erasers? Or just knock them out? Because the former would be pretty rough. YIKES." -Alice

All the Erasers who had their equipment upgraded by Sin sometime over the last few months have, indeed, left this mortal coil. (He is not messing around!) That won't be every Eraser, but it'll be a huge chunk of them. Definitely more than half.

You are not the only one who hoped it was the later, though! Check out this awesome guest strip sent to me by Samantha “Spot” de G:

Thank you, Samantha! I love this stuff. (Samantha is working on a comic that hasn't launched yet, but I'll be sure to link to it when it does!)

"So, did Sin have to avoid saying "Whiteout" for a couple of years?" -Dave

Only a few months! But yes. Fortunately Sin never corrects his mistakes!

"Would you say that Wednesday's comic was perhaps the darkest moment in all of Sam and Fuzzy? Either way, what would the competition be?" -Mercury

I actually thought that last Friday's Eraser masacre topped Brain's unfortunate disection in the darkness department. But it's definitely all pretty rough collectively!

Is it the darkest moment? I'm not sure! I always thought the whole final showdown between Sam and Blank got pretty grim. Of course, the scale there was very different. But it's hard to compete with this last panel.

"Will all the Patreon stuff be available later for people that maybe want to chip in eventually, but are cash strapped / other circumstanced for now?" -Keith

Mostly! Everyone gets the ebooks right when they sign up, and new Art Blog level Patreon backers will be able to read the backlog of previous posts whenever they sign up! The idea with the blog is to use it to talk about things I'm working on right now, so many of the posts are kind of time-relevant things like previews and early comics. But if you want to catch up on old posts, they'll all be there!

I may rotate some things out of the Secret Art Vault over time, though, just to make room for new stuff.  (The Photoshop files in particular take up a lot of space!) But there will always be a healthy amount of swag in there at any given time! 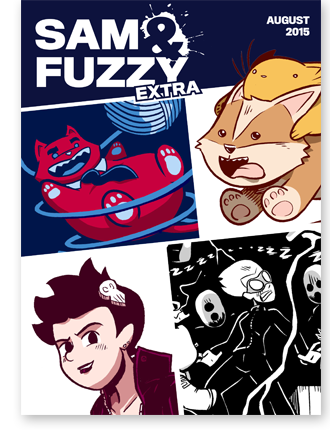 Friends! I've decided to start collecting the Sam and Fuzzy Patreon Art Blog posts into a little PDF e-magazine called Sam and Fuzzy Extra. If you're backing the Patreon at the Art Blog level or higher, you'll find the first issue in your activity feed now, and a new issue arriving at the start of each month.

This month's issue has a couple of pencils-to-finished-art process breakdowns, some bonus drawings and mini-articles, and some in progress pin-up stuff. Hope you enjoy!

Thanks to anyone and everyone who supported the first month of the Sam and Fuzzy Patreon at any level. It is much appreciated!

Thanks for a swell week, Indianapolis! Gen Con was even bigger and crazier than ever. I look forward to returning in 2016!

Well, I'm off to spend a day in airplanes and airports. See you on Wednesday, team!