Sam and Fuzzy Q & A:  Time After Time Edition
Got a question you want answered? Just drop me an email with "Q & A" in the subject line!

"Will you/your products be at TCAF this year?" -Devon

I will not! I thought pretty seriously about returning, but it's just going to be a super busy time of the year for me (both with other conventions and with an actual Real Vacation!). I will, however, be at Toronto Fan Expo in August... so I'll definitely be gracing your fair city at least once in 2016.

"Is the mysterious pit a time tunnel?" -Asher

No! That's a fun theory, though!

I would not normally answer a spoilery question so specifically, but I think it's OK to state this definitively: time travel will never be the explanation for any important plot stuff in Sam and Fuzzy. It's fine for jokey stuff like Future Fuzzy, but as far as serious elements with real effects on the narrative, I consider it against the "rules" of the Sam and Fuzzy universe, as far as permisible fantastical/supernatural elements go. The Underground may house vampires, artificially intelligent robots, sentient cats, and at least one living dinosaur, but there are no time travellers.

I like time travel stories a lot, when they are done well! Sam and Fuzzy just isn't one of them.

"Speaking of the past, after Sam became Emperor did he ever pay his boss back for destroying the cab?

And where on the site are all of the twitter-sketch images? " -Tom

I think he paid Ackerman back earlier than that! He was already sending him money when he first went on tour with Noosehead.

There is no central gallery of all the twitter sketch images, actually! You can still find the various specific Sketch-Off mini-galleries of low-res versions in the chronologically appropriate newsposts in the site archive. But as far as actually collecting them all together in nice hi res bundles, I tend to do so maninly for bonus rewards! (Patreon backers get a couple of Sketch Off ebooks, and folks backing at the Secret Art Vault get pretty much all the Sketch Off stuff as a part of the vault.)

I was just realizing today that I've never mentioned this here before, but... did you know I'm on Vine? Because I am on Vine! I use Vine pretty much exclusively to share videos of my award-winning dogs. (I gave them the awards.) But I guess in theory I might post something comics-related there someday, maybe? Well, probably not. But they ARE cute dogs.

We return on Friday, with a new comic and a new round of reader Q and A! As always, if you have a question you'd like me to answer, just pop it in an email with "Q and A" in the subject line! 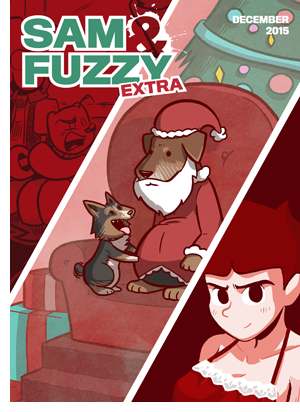 Note the first: tomorrow the last day Americans can order Sam and Fuzzy swag by Standard mail and recieve it in time for Christmas. After that, y'all will have to splurge for a quicker shipping method to get it in time! (Meanwhile, Wendesday is the Priority Mail deadline for international buyers!)

Note the second: a brand new issue of Sam and Fuzzy Extra is now available to everyone backing the Sam and Fuzzy Patreon at the $5 "Art Blog" level! If you're a backer, you can find it -- and all the previous issues -- in my Patreon activity feed. (Each issue collects a month of art blog posts... sketches, behind-the-scenes stuff, and exclusive drawings and illustrations!)

All right! Come back on Wednesday for more flashback antics. See you then!