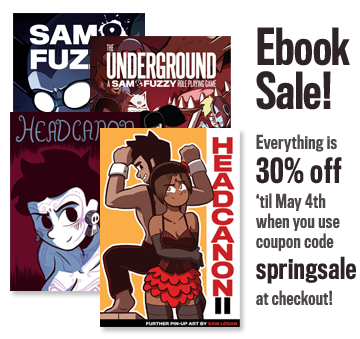 Hey, team: we've got an ebook sale running over in our gumroad store!

From today 'til May 4th, you can nab any and/or all of our digital PDF books for 30% off by using the offer code springsale at checkout. This includes both my ebook exclusives -- like my two Headcanon collections of pin-up artwork -- as well as the digital versions of the Underground RPG gamebook and my regular graphic novels.

Everything must go! Except... except it's digital, so there's no actual stock, so I guess it's more like... everything must be digitally replicated over the internet!

We return on Friday with a new comic and a new round of Q and A! If you've got a question you'd like me to answer, just pop it into an email with Q and A in the subject line. See you then!

Where you need to go

Good old Carlyle: sage advice-granting cab driver, low on appearances and high in impact. If you're a newer reader and are unfamiliar with him, there's not much to catch up on! Here's a cheat list of the handful of past strips in which he appeared or was mentioned.

Thanks to everyone who came out to see me at this weekend's talk at Bolen Books! That was a lot of fun. (And a great excuse to chat with the talented and extremely pleasant trio of Tony Cliff, Renee Nault, and Faith Erin Hicks.)