Sam and Fuzzy Q & A:  Adult Edition
Got a question you want answered? Just drop me an email with "Q & A" in the subject line!

"Re-reading the original comics, I was surprised by how much FOUL LANGUAGE there was! Not that I'm offended or anything, but Sam and Fuzzy really used to cuss up a storm back in the day. Any particular reason for the change, like making the comic more 'family friendly'? Do you try to restrict the comic to be appropriate for a particular age range?" -Erin

Honestly, cutting back on the swearing was totally unintentional. I think it's just me showing my age! When I started the comic, I was 19 years old. I just peppered everyone's dialogue with casual swearing at about the same rate that I did my own speech at that time. My dialogue writing was a little more unrefined, and I didn't think as much about individual character voices, so I just wrote a bunch of people who all swore similar amounts.

Today, the same kinds of swear words -- your hells, damns, asses, and what have you -- all still show up in the comic... just not as frequently. It's not really about trying to be more "family friendly". I think it's more the unintentional result of trying to create distinctions between the speech of characters who are more or less vulgar than one another, and to emphasize when a usually polite character is especially irritated!

As for age range appropriateness, when people -- usually parents at conventions -- ask me what age range my comic is for, I usually tell them the content is "Simpsons-level". (I've found that's a helpful analog for relative levels of language, sex, and violence that basically everyone understands.) I have a sort of internal guide of what is and isn't appropriate to put in Sam and Fuzzy, and I try to stick to it, but that's less about self-censorship than it is about maintaining tonal consistency.

I guess what I'm basically saying is, I wouldn't use the word "restrict", but S&F has a particular vibe that I'm not keen to disrupt! I've got nothing against doing older-skewing work -- even older-skewing work that uses these characters or is set in this universe -- but I'd feel weird about suddenly shoving it out of nowhere into an established 14-year story that people have been reading. But if there was something I really wanted to do, I'd do it... just as some sort of spin-off project. Which is I guess where my pin-up art books came from! Although that was less about wanting to tell gritty mature stories than it was about wanting to draw cartoon butts.

"That is a very interesting use of panels in this comic! Could you go into detail on it’s design?

And by the way, is that a book on Carlyle on sale? Is that a face on the cover? Finally, it’s Sam’s chance to finally learn the face of everyone’s favorite fortune cookie!" -Jake

That one just sort of came together!

Montages are fun opportunities to play around with panels and layout, so I try not to be lazy with 'em. I landed on the tree concept when I was brainstorming and liked it because, in addition to just looking pretty, it also conveyed a general idea of about how much time is passing. (Ie: a single season.) And when I realized I could do that neat effect in the final third -- where the inset montage panels are turned into "windows" showing the rest of the tree and tracking the falling leaf -- I decided to go for it. Then it was just a matter of figuring out which events should be depicted in the montage panels. (Which was tricky, since there were a lot of things that needed to be conveyed in 'em!)

And yes, that is Carlyle's infamous autobiography on sale in that shot! Sadly, due to a printing error, every copy of said book features a big black square where Carlyle's face should be. So no such luck for Sam!

"I love all the cute dog and cat drawings you post on twitter when you're at conventions! Do you collect any of them anywhere?" -Amy

If you don't follow my twitter, you might not know this, but every time I go to a convention my feed becomes a flurry of animal art. I really like drawing cartoon animals... I make a lot of shirts about them, and drawing pets and other critters has become an increasingly big part of my con routine as well.

Considering how much I do like drawing that stuff, it's probably incredibly stupid that I don't have a corner of my online presense dedicated to it. I haven't corrected this yet, but it's something I hope to get together before the end of the year... even if it's just something as simple as a dedicated tumblr.

That's a wrap for this week, friends. Come back on Monday, when THINGS GET REAL.

Today: a brief quiet before the storm. A fateful meeting is imminent! Hold on to your collective butts.

We return on Friday with a new comic and a new round of Q and A! If you've got a question you'd like me to answer -- about Sam and Fuzzy, or comics in general, or pretty much anything else -- just pop it in an email with "Q and A" in the subject line.

PS: And if you're backing on Patreon, don't forget to go vote for this month's bonus drawings of X, Y, and Dev! If you've backed (and are logged in), you'll find the link to the poll in my Patreon activity feed. 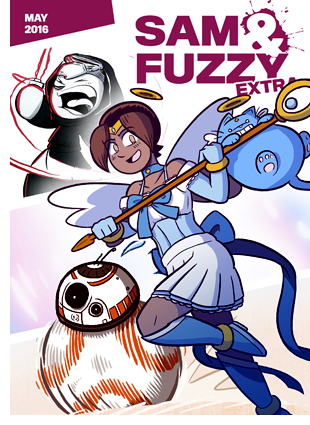 May Patreon Vote and Bonuses

It's a new month, which means new goodies over on my Patreon:

-The poll to pick this month's two backer's-choice bonus art pieces is now up! Patreon backers at any level can vote. (Last month's pieces, if any of you missed 'em were Magical Girl Dev and Rey and BB-8.)

-The new issue of the Sam and Fuzzy Extra e-magazine is now available for everyone backing at the Extra level or higher. This month's issue shows the behind-the-scenes making of both bonus pieces and the big tree montage comic from last month, plus a bunch of other fun art and sketches.

If you're a backer already, or decide to sign up as one, you'll find this month's vote (and Extra, if you're an Extra backer) in my Patreon activity feed. Thanks for your support, and enjoy your bonus swag!