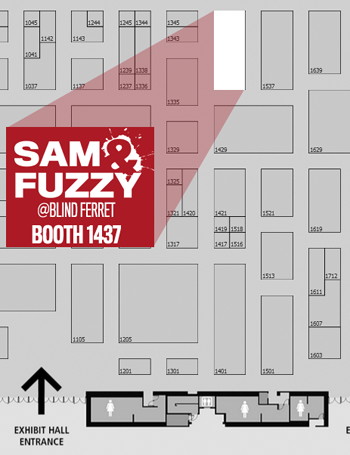 It's that time again, friends... time for GEN CON!

If you're going to be there, be sure to come swing by the Blind Ferret booth (#1247). That's where I'll be hanging out for the majority of the show... saying hi to folks, signing books, and doodling up a storm. And there will apparently be a fine selection of Sam and Fuzzy swag at the booth as well, including some secret brand new things exclusive to the show! (For now.)

But if you're not at the show, don't fret. New comics will keep running as usual while I'm away. Come back on Friday for the next one!

Tomorrow I fly off to Gen Con! Looking forward to another non-stop week of gaming madness. Hope to see a bunch of you there!

In other news, I'm going to wrap up my little commission sale today, so if you wanted to get an original one or two character drawing at the sale price, today's the day! I've done a bunch of fun ones already, but I should have time to do a couple more. Wacky Sam and Fuzzy character pieces, cute pet portraits, stylistic spins on pop culture characters, silly and/or sexy pin-up type art... pretty much any kind or style of single- or dual-character-focused piece should work. Just email me with your request!

Sam and Fuzzy Q & A:  For Real Friday Edition
Got a question you want answered? Just drop me an email with "Q & A" in the subject line!

"What sort mafia do I need to pay tribute to and in what quantity to get a (mobile?) wallpaper of Sam from the end of this update? It looks amazing and I need that in my life. I'm sure I'm not the only one! Is this the thing that pushes me into patreon or is this more sacrificing-my-first-born territory?" -Carl

Tell you what... to get it, all you have to do is... nothing! Except click. Because here it is.

That said, you're welcome to back the Patreon if you'd like! The Art Vault tier is the one that grants access to a giant backlog of wallpapers (as well as 1000+ other pieces of art)... but backing at any level will score you some e-artbooks and giving you voting privileges for our monthly bonus art votes.

"You may have answered this before, but is Sam & Fuzzy a one-man job? You do both the art and the writing?" -Ben

Yup, the main Sam and Fuzzy comic is all me!

There have been collaborators on some of the S&F side projects though, of course... all the O-GAWD guest strips were made partly or entirely by other creators, and writing duties on The Underground RPG were split between myself, Shannon, and the game designers at DTD.

"I have a pretty big question about the Committee. Why on earth would they kick out another member because of insufficient influence? [Anthony is referring to when they refused to acknowledge Sam because they felt NMS was not a true successor organization to the Ninja Mafia crime syndicate, or when they considered booting Sin, as I talked about in this previous Q and A.  -Sam] Yes, the ability to actually manipulate the status quo is important, but that doesn’t factor in the original purpose of the Committee: To protect the Pit.

Why was the Committee content to let one of the codes to the Pit just… be out there? In the open? What if something happened to Sam? or more importantly, the code? I understand Sam only contains a piece of the Pit Code, but the Committee doesn’t seem like the type to take chances on this kind of thing? Why did they just let a Pit Code float around?" -Anthony

Think of it this way. The original Committee was formed by the coming together of 31 equal, independent members. One of their first decisions as a collective was to hide the infamous Pit from everyone on Earth... including future Committees. But in case it was ever deemed necessary to find it again, they crafted a special emergency contingency plan.

Each member was charged with one of several code numbers which, when combined, reveal the location of the pit. Individually, the numbers are useless. They're useless even if someone has all but one of them. The pit's location can only be identified when every number is used... in other words, when the successors of every one of the original members agree it's a good idea.

Each one of the codes was the sole posession and responsibility of one individual member of the Committee, to protect and hide and pass down in the manner of their individual choosing. Some chose to share theirs internally among other high ranking members of their organizations. Some hid it within an artifact that is passed down from leader to leader. Some only passed it on verbally, from predecessor to successor!

Now, one member might not like how another member handles their code. They might think they're sharing it too widely, or not keeping it sufficiently secure, or treating it so securely that there's a danger it might die with them. But ultimately, they have no say, and neither does the Committee as a whole. The Committee sets Status Quo law and controls what is and isn't allowed on the surface... but the codes are the charges of the individual members, to do with as they see fit.

But by that same token, possession of a code number doesn't make you a Committee member. Each Committee seat is traditionally held by the head of specific organization or businesses. Sin became a Committee member when he initiated a (very) hostile takeover of an existing member business, which he immediately renamed Sin Enterprises (as seen in the Underground RPG gamebook). He was able to maintain his membership despite losing control of Sin Enterprises' primary business asset, Sin Records, by convincing his fellow members that his meager remaining business interests and criminal influence made him a more logical successor than Earl, the new CEO of the rechristened Sun Records. And Sam only finally became a member when he was able to convince the council that his Ninja Mafia was a true ressurection of the original organization, and not a copycat with a similar name.

It was assumed, in both Sam and Sin's cases, that each of them managed to get their hands on their organization's respective code numbers, but... it's not like anyone could test them to find out. Maybe they didn't! It's a risk built into the system. At any time, a code could be misplaced, or stolen, or lost in the mind of a member who died without making arrangements to pass it on. We saw how complicated things got with the Ninja Mafia code. It was definitely not the only one with a sordid ownership history. This is part of why it has taken Hazel and Brain so long to round them all up!

Well, I hope you enjoyed that giganto answer! Come back on Monday for our next comic. POW!