Sam and Fuzzy Q & A:  Suit Up Edition
Got a question you want answered? Just drop me an email with "Q & A" in the subject line!

"Pardon my ignorance but Fuzzy was gone for a while being kidnapped and all, so what seat does he have in the committee?
Speaking of Fuzzy, I know he found Eric's jacket but is that why he's suddenly wearing a suit?" -Sean

It has been a while, hasn't it?

Fuzzy used his sitcom superstar fortune to become the primary stakeholder in the Graves Group -- AKA the owners of Sanpresto and Fig Pig. That's what entitles him to hold a seat on the Committee and participate in their votes. (While Fuzzy was kidnapped, previous Graves Group rep Natalie Graves filled in for him.)

As for the suit... I guess he's just trying to be a little more professional now that he and Sam are trying to get things done over there!

"I noticed that your last batch of 'filler' comics were mostly in color. Have you ever considered switching Sam and Fuzzy over to full color?" -Emily

Not really, no! I like working in colour, and it's fun to use it for side Sam and Fuzzy projects like the pin-up books or Patreon bonuses, or for non-S&F work. But the actual main Sam and Fuzzy comic has such a particular "look" to it... I think it would be jarring to change it so dramatically mid-series. It would also make the individual comics a lot more time consuming to make, which would mean I'd either have to reduce my update schedule or decrease the size of individual comics.

I think you'll keep seeing more and more colour stuff from me in the future, but the big Sam and Fuzzy comic arc I've been working on since Fix Your Problem will remain in glorious black and white (and grey) right 'til the very end!

"There's a bunch of stuff about the robot species and faction in The Underground gamebook. Is that all still canon, or will the current story be retconing any of it now that the robots are appearing in the actual comic?" -Adam

Oh, it's totally canon! I wrote all that lore myself, with this story in mind. It describes the state of robot affairs a few years prior to the time of the current storyline, but it is otherwise 100% in line with what you'll be reading here. And so is all the other lore about the various factions and species described in the "Guide to the Underground" section of the book. That was part of the fun!

(The Underground RPG is, of course, available in print here or as a drm-free PDF here!)

Our next comic arrives on Monday! BE THERE.

Pardon my ignorance but Fuzzy was gone for a while being kidnapped and all, so what seat does he have in the committee?

Speaking of Fuzzy, I know he found Eric's jacket but is that why he's suddenly wearing a suit? 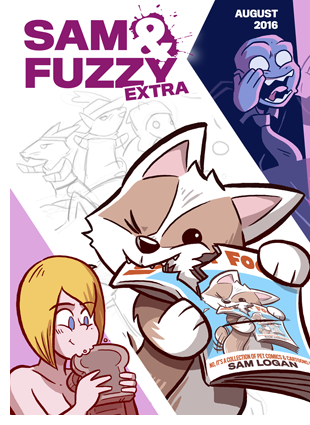 Patreon backers: the August backer rewards are available now, and this month's Bonus Art Poll is now live and awaiting your suggestions. You'll find all of the above in my Patreon Feed when you're logged into your account!

For this month's bonus art poll, I'm doing something a little different... instead of holding a multiple choice vote, I'm letting backers submit direct specific suggestions for S&F dress-up and pin-up ideas... and then picking and drawing a bunch of them entirely at random! Which ideas will I wind up drawing? Maybe the best suggestions! Maybe the worst ones! I am choosing to live dangerously. (I guess we'll find out how dangerously in a week.)

There's also a new bonus-content-stuffed issue of S&F Extra for Extra-level backers, and a new update to the Secret Art Vault with a bunch of new con sketches and pin-up commissions. Yee ha!

Our next comic arrives on Friday, as does a new round of reader Q and A. (Got a question you want answered? Pop it in an email with "Q and A" in the subject line!)

Well, another Gen Con has come and gone! As always, I had a great (and crazy busy!) time at the show. It was lovely to see so many of you there... and meet some newbies as well!

Today I'm flying back across the continent to hone sweet home. While I do, here's a comic for you to enjoy! The next one arrives on Wednesday. See you then!