We did it! My new book Kickstarter for Volume 5 and the 1-5 Hardcover Set has funded, and there's still 21 days of the campaign left to go. That means, as with my previous Kickstarters, that we'll be able to spend the rest of the time using any additional funds we raise to further awesome-ify the books we're making. Bonus features and art, special inks... how exciting! This is my favourite thing about Kickstarter -- making especially awesome stuff that I could never have done on my own. As a kid, I never dreamed my work would someday be collected in collections this big or fancy. I'm dang lucky to have you guys.

In other news, if you're an international customer looking to nab some of my Topatoco goods in time for Christmas, December 2nd (this Friday) is the recommended international ordering deadline!

Last but not least, I recently resurrected my poor beleagured DeviantArt page. As I've been doing with my tumblr, I'm going to do my best to post semi-regularly and keep the gallery up to date. (It will largely be the same pieces on both sites, so feel free to pick your favourite.) It'll be a mix of commissions and the bonus drawings and pin-ups I do each month based on Patreon backer suggestions.

We return on Friday with a new comic AND a new round of Q and A! So if you've got any questions you want answered, shoot 'em my way via twitter or pop 'em in an email with "Q and A" in the subject line.

A new week kicks off today in grand style, with our new Kickstarter -- to print Volume 5 of the new series, as well as a new hardcover omnibus collection of the complete new series so far -- over 85% funded. Wow! Thank you so much for your enthusiasm, everyone. I am incredibly touched to see a campaign this ambitious doing so well, and so soon. I am glad you like giant books!

As you are well aware, today is also the extremely real, broadly celebrated international holiday of Cybear Monday. And so of course, in accordance with storied Cybear Monday tradition, I will be adding one new bear to this picture for every additional person that backs our Kickstarter today. 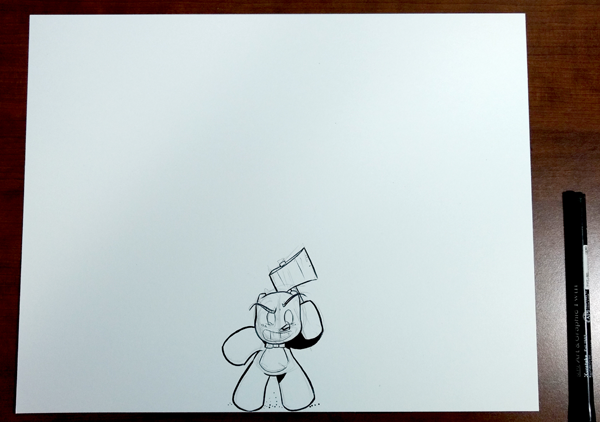 I'll post updated photos of the drawing throughout the day on twitter. All backers will recieve a hi res digital version of the finished piece, and are also welcome to suggest possible costumes for some of the bears! It's a way to give everyone a fun little bonus while also paying tribute to all the brave heroes who fended off the Cybears in the Great Bear Clash of '97.

I think you will agree that this is a great idea that almostly certainly can not backfire in any way.

We return on Wednesday with more comics. See you then!

Just in case you forgot him: The Designer! (Also know as Theo.)

It's been a whirlwind of a week, friends! On Wednesday, I launched my new kickstarter campaign: to publish the latest book in the current Sam and Fuzzy series -- Volume 5: Missing Inaction -- and to create a new set of hardcovers recollecting 1-5 in a format that matches the 2013 hardcover omnibuses of the "prequel" Classic and Noosehead arcs.

I was a little nervous tackling this project -- it's the biggest one I've ever attempted! -- but thanks to all your support, we got off to a great start. The kickstarter is already almost two thirds funded, and it's been less than two days. (One of which was a holiday in the US!) If we can keep this up, we'll be able to make all these dang dream books a reality, and maybe even beef 'em up with some cool bonus features like we did with the previous kickstarted books.

Thanks so much to all of you for your continued support! You guys are the best.

PS: I've gotten a few messages from folks who want to confirm which books they need. I admit, with two slightly different formats, it gets a pinch confusing. So here's a handy breakdown.

Which of these people are you?

"I have the Omnibus from the 2013 Kickstarter, and that's it!"
You want the Volume 1-5 set! It picks up exactly where the original Omnibus left off and collects the entire new series so far, starting with the first appearance of Hazel and finishing up (for now) with the giant Sin's Gambit story. You can get it as a set of five softcovers, or as a set of three larger hardcovers, both of which match the respective softcover and hardcover versions of the original Omnibus.

"I have all (or some) of the four newer softcover books, like Fix Your Problemand Very Famous!"You can get Volume 5 all by itself, if that's all you need! It's available in a matching softcover form that looks really cool, IMO. (You're also welcome to get the hardcover version of 5, or the full hardcover set, if you really like hardcovers, but I'm not here to tell you what to do!)

"I don't have any books at all! NONE!"
Well, that's easy! You can get the softcover OR hardcover Volume 1-5 set, which is a completely stand-alone new story, or you can spring for the Completionist set and get the two prequel omnibuses as well! However, I would not recommend going for the Volume 5 solo tier. That one isn't going to make much sense if you haven't read the previous 4!

BOOKS! YOU CAN READ THEM