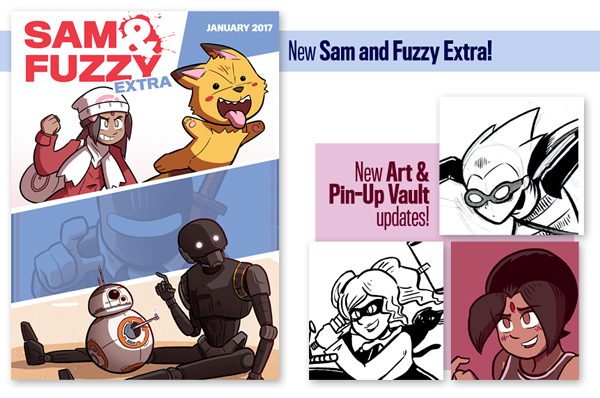 Sam and Fuzzy Q & A:  Cinful Edition
Got a question you want answered? Just drop me an email with "Q & A" in the subject line!

"The Unit 01 / Sin / Cin / Sim reveal was brilliantly unexpected. But why does Unit 01 look like Sin's Exo-Suit, and not his space-gopher-thing face? Was it purely for the sake of the 'old gang' recognising him, or has (had?) he spent so long Exo-Suiting that his self-image is the suit?" -Brad

Sin feels like humans don't take him seriously when they see his true alien-rodent-esque form. (Mr. Black, who clearly caught a glimpse of it at some point, came up with the "space gopher" term to mock how he looks.) So he prefers to keep it hidden, even from people who know the truth.

Sin's exosuit is his preferred way of presenting himself. He identifies with its branding so strongly to the point of vanity... which is why he models a lot of his creations after its facial characteristics (like Fig Pig), and continues to use the same base suit (with slightly different haircuts) every time he has to otherwise reinvent his identity.

So, that's why "Mr. Cin" chooses to present himself visually as the Sin exosuit. It's actually the Sin Records-era version of the Mr. Sin persona, specifically -- with the big eyebrows -- since that's the look he was rocking when he built Unit 01, and unlike the real "Mr. Sin", he never had to abandon it.

"Is Cin, Sin's name as computerized copy of the original Mr. Sin's brain, a reference to a standard object of a popular programming language?" -Michael

Not intentionally! But I like that coincidence a lot, so let's pretend it's on purpose.

"Did you plan on Brain being the same type of demon as Fridge from the very beginning?  Or did it occur to you after Brain was already a character?" -Emily

That was indeed always the plan! The nature of Brain's species (some of which has yet to be revealed) is something I had to figure out before he first showed up. It was back then, when I was figuring out exactly who and what Brain would be, that I decided I could retroactively cast Fridge as another member of his kind.

But back then, I wasn't sure exactly when, or even if, we would actually see that Fridge was the same kind of demon as him. I just knew he was primarily for my own benefit. It was only a little later, as I was plotting out the last few volumes of the series, that I decided exactly how I was going to, uh, present that information to the reader.

Thanks for all your great messages and questions over the last few weeks, team! I'm glad you're enjoying the story. It continues on Monday... BE HERE!