Sam and Fuzzy Q & A:  Bad Hair Edition
Got a question you want answered? Just drop me an email with "Q & A" in the subject line!

"In Wednesday's comic, among the businesses listed in Grace Wilkinson's letter there's a mention of a 'secret hair product designed to' ... to what? It's somehow related to having a 'bad hair day' as the letter suggests, but how, what does it to? Mind control, madness, cause male pattern baldness? We must know, or at least I do - assuming it's spoiler free of course!" -Stefan

Sorry, Stefan. I'm afraid this is a major spoiler that affects the climactic outcome of the entire series!

In seriousness, though, it's a hair product marketed for styling, but that secretly causes bad hair days... thus encouraging people to buy Clover-brand hats! Truly, there are no depths to which these Committee types won't sink.

"Are we going to see any creatures from Metroid in here? Cause that would be awesome! Y’know, like that big fish thing from Metroid Fusion! Or maybeeee… a Gyrados! Yeah, Pokémon are totally real things that escaped into the public and video games are a cover up! (And this is how head-canon is made.)" -Claire

There are a lot of weird critters in Raphael's collection! They're mostly ones I made up, although there's a set of twin fox tails in some of the panels that look like they might belong to Sonic's best bud.

There's actually a known inhuman species in Sam and Fuzzy that already kind of resembles Metroids... the Jellies! They are represented on the Committee by Oobler. (I love Oobler.)

"Still loving Sam & Fuzzy, and looking forward to the inevitable (if hopefully still a bit distant finale), but something bothered me about your recent Q&A - specifically, the 'GPS coordinates'.

GPS coordinates are just longitude and latitude, which have existed in some form or another for millennia. Google suggests they may have existed since 120BC in Ancient Greece. There's not really any contradiction with a ~600-800 set of coordinates (though, they'd probably not align perfectly to modern coordinate systems). I might be mistaken, but if not, sorry to ruin your joke." -Brad

Oh yes, the concept of longitude and latitude are very old! The "problem" the original question asker was referring to, though, is that there was no perfectly accurate way of measuring longitude in the 1500s. (You can read all about the history development of methods to measuring longitude right here!) There was also no universally accepted prime meridian (aka the location of longitude 0) until 1884. So whatever coordinates the pit codes provide would a) not use  the modern longitude system, and b) potentially be incorrect even when converted.

Personally, though, I think it's fine to assume Hazel is familiar with however the Comittee of the time measured longitude and latitude and is able to adjust for any know innaccuracies it might have. These guys were more advanced than any known humans on Earth at the time, so we'll assume they were at least reasonably good at it!

That's all for this week, team! See you on Monday.

It's Valentines Day, friends! And with it comes not only a new Sam and Fuzzy, but also the new issue of Invader Zim that I wrote! (Which you can learn all about in our previous newspost!) You can nab the later at your local comic store, or digitally via Comixology. S&F and Invader Zim... a true OTP! Or something. 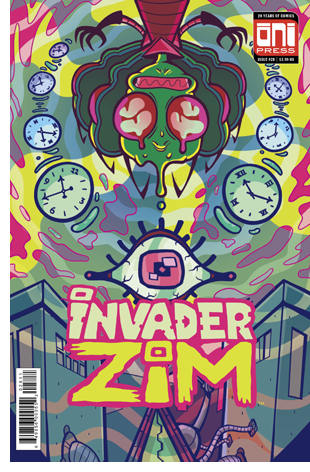