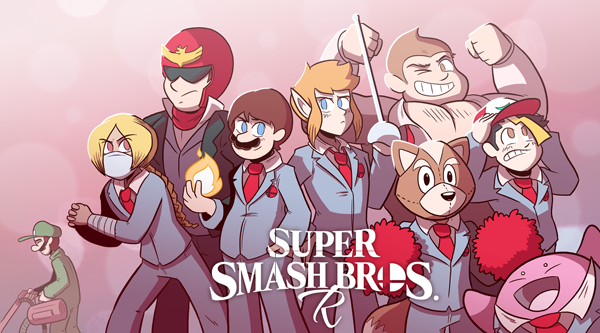 Sam and Fuzzy Q & A:  Only Endgame Edition
Got a question you want answered? Just drop me an email with "Q & A" in the subject line!

"With your comic and Strong Female Protagonist both entering their final stories, what webcomics am I not reading that I should be, to start preparing to fill the imminent aching void in my soul?" -Rob

Well. I really like Barbarous, by Ananth Hirsch, Yuko Ota, and J.N. Wielde! It hasn't started yet, but Michael Lunsford of the now finished Supernormal Step will be starting a new comic called Speak of the Devil in a couple of weeks that I think will be worth checking out!

And of course... when my comic is done, you should start reading the next comic I do... because if you like the ones I've done so far you'll probably like that one, too!

"Over the last year, it's felt like you've been taking more break from the 'main' story to do gag strips, or side stories like the recent Conscience Cat one. While I've really enjoyed a lot of those comics, I'm curious if there's any reason you've been spending time away from the 'main' story. Are you scared about actually getting to the end of S&F too soon? (I know I am!)" -Alice

I'm glad you've enjoyed some of the other work I've been publishing, Alice! I've been having a lot of fun with it.

The truth is, this last year has been kind of a tough one for me. First, I went through some big changes in my personal life in the fall. But even a while after that, I found myself struggling with a really low energy level. As it turns out, I was actually suffering from anemia. (It took a few months to figure out what was causing it, but I was ultimately diagnosed as Celiac.)

The endgame of Sam and Fuzzy is very important to me, so I didn't want to push through part of it when I was not feeling at my best. That said, I still really wanted to draw comics, because... well, I really enjoy drawing comics! So taking the occassional break from the high pressure main story stuff to work on other kinds of comics was my way of going a little easier on myself. It gave me more time to write my "main" story comics in advance, and also led to some interesting things like the Carlyle/Conscience Cat chapter, which I'm rather fond of!

These days, I am feeling much better. And since being diagnosed and removing gluten from my diet, my body has started absorbing iron again and my energy level is back to normal. So that's why I have lunged back into the big story stuff again! I may still spend the odd week here and there on other things in the future, though. I feel like it keeps my mind fresh and ensures I'm at my best when I'm tackling the events of these important climactic Sam and Fuzzy chapters!

"A recent Q&A question about previous iterations of the Sam & Fuzzy site reminded me of something pretty fascinating: the Features page, which was removed from the main page of the site when it upgraded to the current version in March 2014, still uses the original site design. Even more interesting, however, is the fact that the entire original site can be accessed through this page! While most of it is obsolete, the Features page holds several old stories (such as the Terrible Christmas Specials) that are not on the new site, and as such is still (presumably) accessed when people read through the archives. Did you know about the original website still being around? And do you think you will ever update the Features page to match the current website aesthetic, or will you leave it as a kind of Easter Egg for archive divers to discover?" -Dawson

I cut the "Features" page from the newest version of the site because I felt like it didn't really have a purpose anymore. Back in the old days, I used to use it to highlight what were then rare events, like guest comic weeks and long form S&F stories. But now, there have been tons of guest weeks, and almost every S&F story is long form.  So the page seemed kind of unnecessary! After all, even though I don't link to a special page to highlight them anymore, all the items that were in the Features section (like the Christmas specials) are still accessible as individual pages in the overall archivem just like all our other comics!

But as you've discovered, I did leave the old Features page online -- with the old design intact -- just to make sure that all the newsposts that linked to it over the years still pointed to something! The same goes for a handful of other ancient subsections of the site, some of which are accessible from that Features page. I've got no plans to update 'em... I think it's kind of cute that there's a corner of the site that still looks like the old version, and aside from a little weirdness browsing the comic archive from there, they seem to function ok.