We'll be back on Friday with our next comic. And I'll be at Edmonton Expo, at booth 114! See you there, Edmontonians!

It's my last con of the year this weekend: Edmonton Expo! Hope to see some of you there, Edmontonians.

And worry not, everyone else... your regularly scheduled Sam and Fuzzy will be arriving as usual while I'm off at the con. Come back on Wendesday for our next strip! 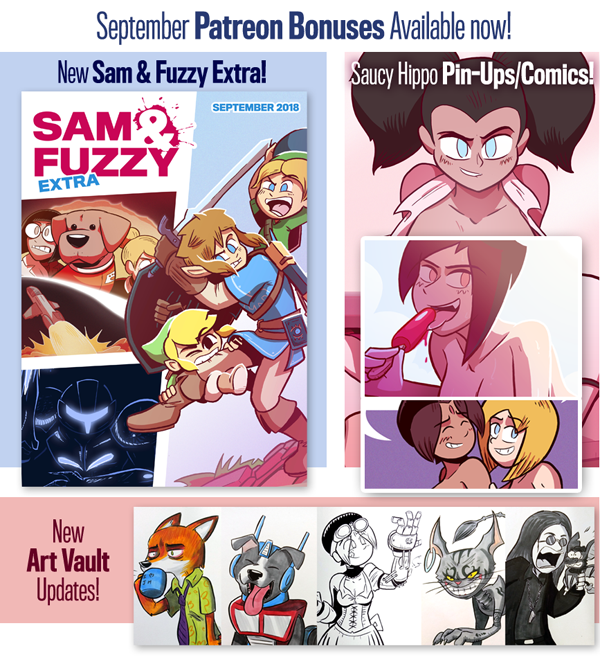 Sam and Fuzzy Q & A:  Past Edition
Got a question you want answered? Just drop me an email with "Q & A" in the subject line!

"Based on this comic, does Hazel mean she is ace, or both ace and aro? I guess, because of Roan pre-transition, I thought Hazel was a lesbian, or at least demisexual and/or demiromatic?" -Agni

Hazel is asexual! It's not really a plot point, so it doesn't come up much, but there have been a few nods to Hazel's orientation thorughout the story... although I think this was maybe the most overt one. It's definitely something I've always kept in mind when I write her, anyway. (For example, it's what Hazel is refering to here when Roan sasses her about not being her type.)

Hazel isn't aromantic, though. She's just lived her life in a way that has mostly prevented (or destroyed) any serious relationships. If she just didn't want to be in one, that would be fine, but I think we've seen Hazel actually has a lot of internal conflict about it. Hazel is not the most, uh, emotionally healthy character -- she's simultaneously very needy, very isolated, and very angry -- and one reason I haven't really trumpeted her orientation is I didn't want people to think I was insinuating it's the source of any of those problems. It's not! But she is ace, and the relationships in her past that have most tempted her to abandon or deviate from "Brain's plan" have not been sexual.

"At one point - I can't find the comic - Bonus appeared to know who Hazel was (and the various wiki summaries of your comic speculate that he therefore has some of Fuzzy's missing memories.)

But then that plot thread seemed to go nowhere and Bonus continued to appear on the TV show, right?  So it was all a ruse: Bonus will be waiting to ambush them at the pit when they arrive, because Bonus-Eric and Sin are actually the same person?!?!?" -Samuel

Ha! Bonus -- and all the Buddy Bots -- are equipped with robot brains that tried (and failed) to duplicate Eric's mind. So demonstrably, yes... they do have fragments of Fuzzy's missing memories! But as Fuzzy discovered by intensively grilling them, it really was only fragments, and only a handful. Everything they could remember, Fuzzy now knows. There's no surprise twist coming where a secret copy of Eric's mind is lurking inside the Buddys, waiting to be discovered. It was a dead end, and what pushed Fuzzy to do, well... all the stuff he did after that.

"In your expert opinion, should the word "Tar" be capitalized when referring to the transmutive material in Sam & Fuzzy? Your beautiful font makes determining stuff like this a bit challenging." -Dawson

I think you would capitalize Tar. That said, have I done so all the times I've referred to it down here? I don't think so. Whoops!

Come back on Monday for our next comic. See you then, team!