Sam and Fuzzy Q & A:  What's My Motivation Edition
Got a question you want answered? Just drop me an email with "Q & A" in the subject line!

"Has Hazel's motivation for going after the Pit been planned since the very beginning?" -Dawson

I feel like I had a pretty good handle on Hazel's character from square one... maybe because it was so directly connected to the story I was planning. There's not much about what makes her tick that I didn't already know back then. (I will say, though, Hazel does come across a little unusually hyper in her first couple of appearances compared to the others... something I tried to recapture a bit in these recent flashbacks.)

But yeah! Hazel's motivations have always been what they are. And really, she's always been pretty honest about sharing them. She started chasing after the Pit when all she knew about it were rumours. It always had to be more about the glory of finding it than about what it actually is, at least initially.

"You clearly have had this elaborate story and world planned for at least a decade, and have been slowly releasing small parts of it at a time for that period. Keeping such an elaborate world so hidden for so long seems like it would drive me crazy. Does keeping so much hidden for so long bother you, and why?" -Kelly

It doesn't really, no. Honestly, I find it very comforting! Every individual comic and chapter is full of little details and story beats and character moments that I have to wrack my brain trying to figure out on a day-to-day basis. So wWhenever I can lean on something that's already figured out -- something that's a part of the "big plan" -- that just makes my life easier. It's like I have a huge box of fireworks ready to go. If I set off all those fireworks at once instead of spacing them out... I'd have no fireworks for tomorrow. I'd have to make new fireworks. This is a terrible analogy. BOOM!

"Now that the comic is starting to reach it's conclusion, have you ever considered collecting your favourite Q&A's from over the years, like the ones that predicted things or that you found particularly interesting?" -CJ

Oh my goodness... there are so many Q and As, though! I've been doing them for years. I am not sure I could even remember what they all were, and I don't think I'd ever have time to re-read them all. I'm sure there are a few times where I've answers similar or identical questions more than once, because I'd forgotten that I'd answered it before. (I do sometimes wonder, though, if I've ever given two different answers to the same question. Ha!)

That's all for today. See you on Monday, team!

We return on Friday with a new comic and a new round of reader Q and A! Got a question you'd like me to answer... about the comic, comics in general, or basically anything else? Just pop it in an email with "Q and A" in the subject line!

I am up to seven pieces and counting for this month's Inktober! Check out my instagram or twitter if you want to see what I've been drawing each day! 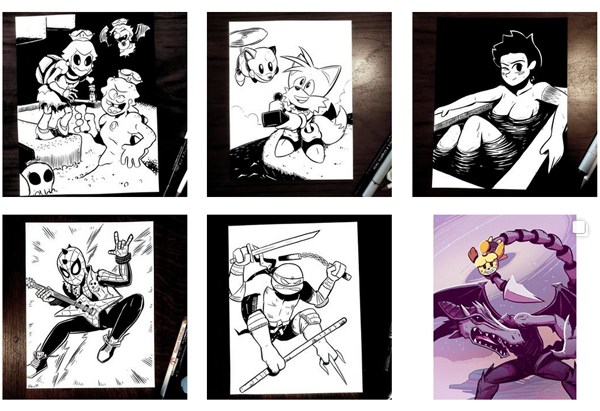 Our next comic lands on Wednesday. See you then!