I'm making my way back from Calgary today. Thanks to everyone who came by the booth! I had a blast, as always.

Come back on Wendesday, and you will find our next comic! Or alternately, for a big solid black abyss. Who can say.

Are you going to be at Calgary Expo this weekend? Me too! I will be at booth 645, hanging out with my pals from Weregeek and Cloudscape! I'll have a massive array of shirst and books in tow. I'll also have a bunch of original art and pin-up stuff, and will be doing lots of custom drawings, too. Come by and check it out! 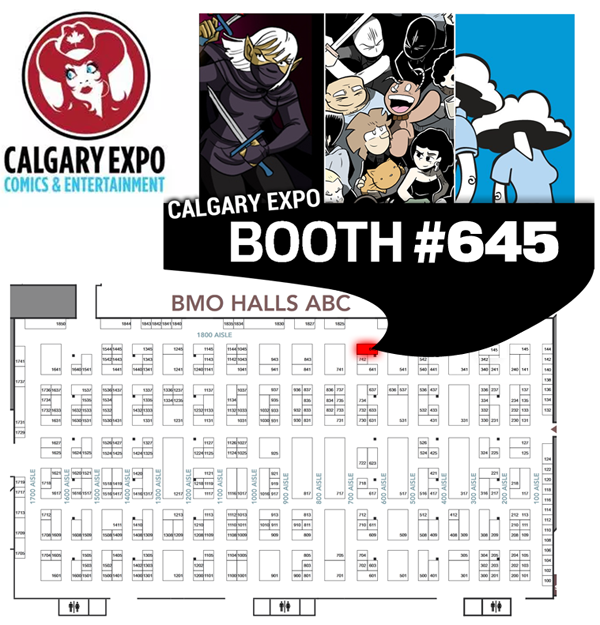 I'll be appearing at Calgary Expo starting tomorrow! If you're gonna be there, come see me at booth #245 booth 645! (We moved slightly: Here's where to find us!) I'll have a ton of shirts and books, as well as a bunch of original artwork and pin-up stuff!

Meanwhile: a brand new issue of Invader Zim, written by yours truly, comes out today! In this issue: Zim and Dib fight to win the hearts and minds of an entire planet of alien grubs. I'm talking millions of hearts and minds. We made sure this thing is practically overflowing with organs. Warren Wucininch drew 'em, and Fred C. Stressing coloured 'em!

This issue is actually part one of a two part story! And later this year, they'll be publishing a four parter that I wrote. (Yes, even in Invader Zim, I can't help but gravitate to bigger stories.)

If you wanna get one, you can nab a copy at your local comic store, order it online direct from Oni, or get the ebook version via services like Comixology. The later two options can get you the other issues I wrote, too! (Which, if you were wondering, were 28, 33, 37, 38, and 39.)

Zim and Dib fight to win the hearts and minds of an entire planet of alien grubs! I'm talking millions of hearts and minds. We made sure this thing is practically overflowing with organs