SDCC starts tonight! If you're going to be at the show, come say hi! I'll be hanging out at the Topatoco booth (#1229), drawing sketches with my pals David Malki and Kory Bing. Topatoco will have a wide array of S&F swag there, too!

And on Saturday at 2:30 pm, I'll be appearing on the Invader Zim panel with Jhonen Vasquez, Eric Trueheart, and James Lucas Jones in room 24ABC. It should be a real experience! 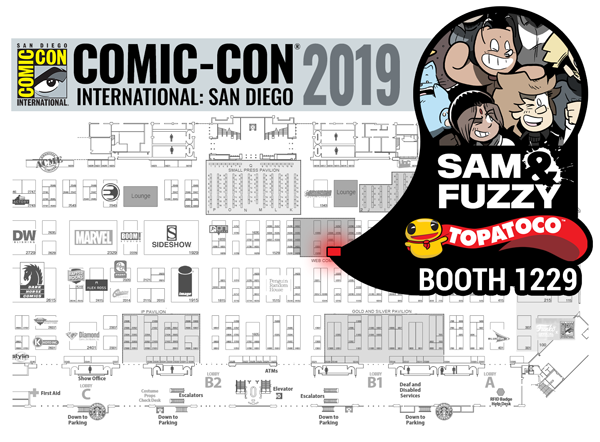 That's all for today. Come back on Friday, where we take an oh so brief intermission from our current story to visit with Rikk and Chompy. Then it's right back to Brain Damage on Monday!

Well, friends, I'm off to San Diego! I'm going to be on the road for several weeks, but rest assured, I have drawn many, many comics in advance to ensure that your regular comics continue uninterupted! (Although there will be one update that will briefly pause the story for a stand-alone gag strip, to allow for some special extra-long comics later in the story!)

In the meantime though... has anyone been playing Mario Maker 2?Because I sure have! I've made two levels so far, and if you've got the game, I'd be delighted if you checked 'em out.

"Fall of the Yoshis" is my newest one. It went kinda viral on twitter, so a lot of folks have already tried it, which is cool!

"The Secret of Switch Tower" is the other one I've done. It's more of a "serious" level, with a series of escalating challenges involving wall-jumping and on/off switches.

Enjoy! Come back on Wednesday for our next comic. And if you're going to be at San Diego Comic-Con... see you there!

Friends! I am wildly busy getting ready to head out to San Diego next week! (I'm going to be at San Diego Comic-Con! I'll also be on the Invader Zim panel!) But while I scramble, please enjoy this here comic. The next one arrives on Monday. See you then!