A new month means a new round of rewards on the various tiers of my Patreon. There's a bunch of new bonus art and behind the scenes stuff for S&F Extra and Art Vault backers, and some saucy new nsfw comics and art for Saucy Hippo backers.

You can find more info about it all on my Patreon page! (Rest assured that, despite the age gate, it's only the locked Saucy Hippo posts that are nsfw.) 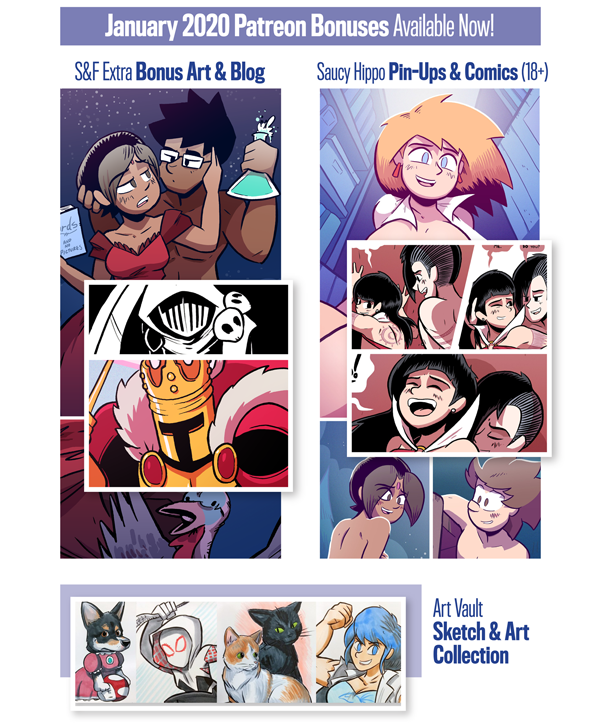 I've got a few stand alone strips for you this week, team, before we lunge into our next story! To start, here's a brand new Skull Panda comic carefully contstructed in cooperation with Rikk Estoban. Rikk usually prefers to work in black and white, but I really felt like this one needed to be in colour!

Anyhow, come back on Wednesday for our next comic. It's ALSO in colour, but it's not a Skull Panda, so Rikk won't be offended.

"I just wanted to say that after the ending of such a great story, with many twists and revelations, it feels very refreshing to see some more 'sitcom-like' comics where the world isn't on edge, and where we can all enjoy funny situations between the members of the cast. My question is, will other characters get to be in this, and most importantly, how long will that last...?" -theandersdeath

Thank you! There are so many characters in the S&F universe that I love to write and draw, and it's both exciting and refreshing to do something "lighter" with them after spending so long on such a giant, life-and-death story arc.

But the truth is, what I'm really looking forward to is the freedom to tell lots of different kinds of stories with my favourite S&F characters! Some stories will skew more slice-of-life and sitcom-y, absolutely. Others, while still comedic, will skew more towards things like action/adventure, crime, and the supernatural. (And of course, I'll also be doing more sexy/18+ stories for the Saucy Hippo Patreon tier, too... I just finished one about Nic and Tats and am about to start a new one!)

As for which characters will show up... lots! You can count on Gert, Detective Morris, Bonus, and Baker, as well as more of Dev and Jess. But there will be lots of other major and minor folks, too. And of course, there will also be some stories featuring brand new characters, in brand new settings.

Basically, my intent is to use this opportunity to tell all the different stories I've wanted to do over the last decade, but couldn't. Some will be shorter, and some will be longer, but I think they'll all be a lot of fun for all the folks out there who have gotten invested in all the different characters and corners of my work up until now. I also think it will be really creatively refreshing for me, and a chance to explore which characters and stories I might want to tackle for my next multi-book project.

"So when Jess says 'Orphanages are notoriously flammable' it makes me wonder, has he made visits to the Looking for Group universe, where Richard has burned down orphanages in self defence? Or has Richard made visits to the Sam & Fuzzy universe?" -Johan

I don't think Fuzzy or Richard have ever visited each other's universes. But I personally visit with the Looking for Group crew myself pretty regularly, since we (as well as a bunch of other comic folks) share a booth at Gen Con every year, and are often placed near each other at lots of other shows!

That's a wrap for this week! But I'll return on Monday with a brand new comic for you. See you then!