Play Us a Song, Dobot 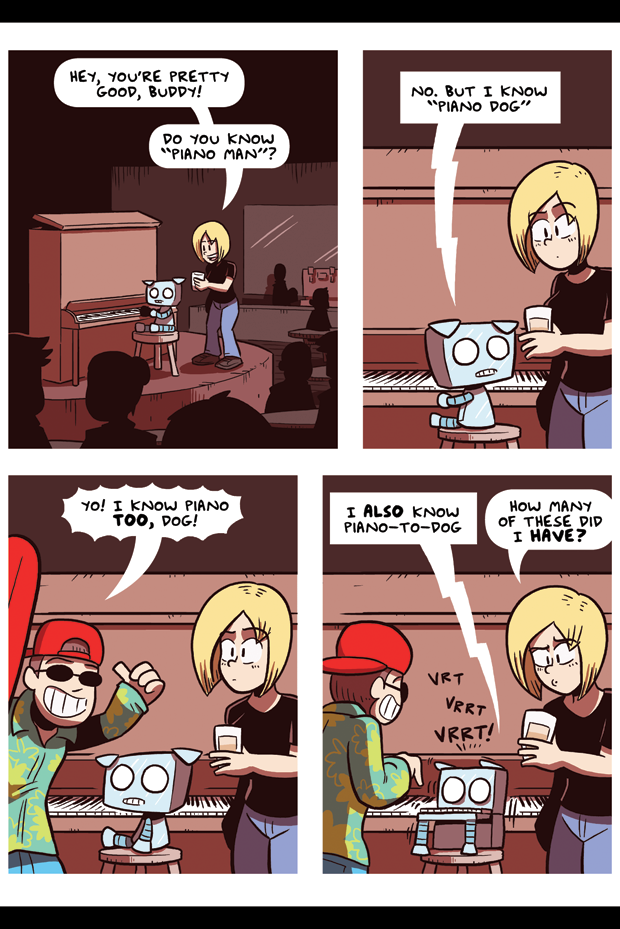 Play Us a Song

It's Dobot! You can find all of Dobot's previous appearances here.

This particular comic was originally one of the many extra strips I drew for the Vote Dog book. You can tell I drew it a little while ago, because Jess Star's hair is still a pretty pure blonde, and not yet exhibiting the ever creeping red tint discussed in last Friday's Q and A. Haha!

Come back on Friday for our next comic! See you then, team.

Q and A: In-Universe Edition

Today, I get to pass on my usual Q and A duties to some of the cast, instead. Thanks for the break, gang! (Sort of.)

Today's comic was originally drawn as a monthly bonus strip for my Patreon backers. All of the questions were actually submitted by backers... I had a lot of fun riffing off them! (Patreon folks... I have a whole other new bonus thing going up for you today.)

Sam and Fuzzy Q & A:  Strawberry Blonde Edition
Got a question you want answered? Just drop me an email with "Q & A" in the subject line!

"Was Jess' hair color change motivated by you the artist wanting to change it up or her the character making a remark that forced you the creator to make a change?" -Tekno

It's all on me! Jess's "strawberry blonde" comment was actually a bit of a meta joke poking fun at myself.

Y'see, I get to draw Jess in colour pretty regularly for Patreon stuff. And over the last three or four years, I just seem to have very, very gradually added more and more of a red tint to her blonde hair. Like, look at these headshots sorted in chronological drawing order:

It's not a perfect gradient from left to right, but it's astonishingly close! And these headshots are taken from like four years of drawings.

When I do a color illustration, I usually create the character colour pallets from scratch, just picking whatever colors that I think look good and "right". It just seems like every time I do that for Jess, I wind up going with a hair colour that's just a little redder than the last time. So this wasn't one big conscious decision... just a series of tiny ones. Funny though, right?

"Isn't that Jess and Dev watching "Fresh Loaf"? If so, how is Jess able to stay shapeshifted while outside, in the day?" -Chris

Great question, Chris. The honest answer is, when I originally wrote and illustrated that comic, it was going to be set it later in the evening and more obviously after sunset. But then when I was colouring it, I decided I liked how the clouds looked when they were not as dark, so I just coloured them lighter without really thinking about it. Whoops!

I guess my official canon explanation is that... uh... it's later than it looks? Maybe there is a stadium or something in the background that is lighting the clouds? Lollllll

Something I've never really been forced to decide is exactly how much sunlight there needs to be for Jess to lose in control of her shapeshifting. But I am assuming it must be a fair amount! After all, she can go out in the moonlight, and that's just reflected sunlight. And she also seems to be fine indoors during the day with regular curtains draw... she's not constantly being set off by the ambient sunlight bouncing in. But what else can she get away with? Can she go out at dusk, after sunset? Is she only affected by direct sunlight? These are things I will probably not bother to decide until I am forced to by a story, haha!

"What is Fuzzy doing after the finale?" -Alex

At the time of our current comics, Fuzzy is still off on his international book tour for his autobiography, Fuzzy and Sam. (It's probably selling very well.)

He is on an international book tour, promoting his autobiography!