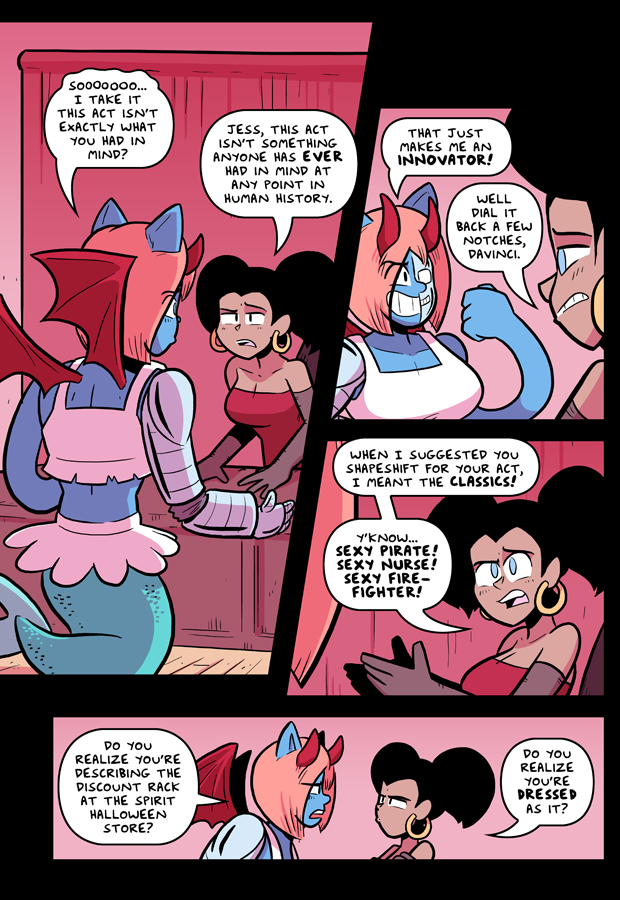 A new month of rewards are out on my Patreon! There's a new bonus comic for everyone, and new behind-the-scenes features and bonus art for Extra and Art Vault backers. And for folks on the Saucy Hippo tier (18+), I just finished the latest new chapter of our ongoing nsfw comic, as well as some new pin-ups. For more info, just check out the patreon page.

Gert suggested it right here, if you were wondering.

Sam and Fuzzy Q & A:  Stylish Edition
Got a question you want answered? Just drop me an email with "Q & A" in the subject line!

"Hello, long-time fan! I don't remember if you answered it before, but how did find that good style that stuck to you? I'm no professional I'm far from it but it always amazed me how much effort goes into and was also wondering learned any tricks for the little guys?" -NScrambled

Fun question! Thinking of style as something that "sticks to you", rather than something you actively seek out, is a good way of thinking about it.

I think about style mainly when I'm trying to draw something that looks different from my usual work... like all the different versions of Bitey the Shark! But my "main" style -- the normal look that I default to -- I feel like a lot of that is unconscious. It's a giant library of artistic ticks that I collected over the years, just in the pursuit of trying to draw well. Some of them are things I copied from other comics I liked, especially when I was younger. Some of them are a byproduct result of the update schedule I keep -- it requires a certain level of efficiency, which encourages certain kinds of artistic choices. And some of them are just things that... emerged. That will happen when you draw as much as I do, for as long as I do!

I think my advice to young artists is... try to draw well! Focus on technique. Study the comics you like, but also study real life. Don't worry so much about your "style". That's something that just happens, whether you want it to or not. It's your personality and life experience sneaking into your art!

"Hi Sam, hope you recover well, and that you enjoy being one of our new robot overlords. Since when do you not have several comics ready in the can? What happened to the famous Sam preparedness?" -Tom

Haha! In case you didn't know, Tom here is referring to the hastily assembled filler comic I ran after my surprise covid vaccine. A long time ago, I used to work on my comics several weeks in advance, which meant I had a giant buffer. I guess that's the famous Sam preparedness!

But the truth is, I actually haven't worked with any kind of significant buffer of comics in well over a decade. I do often write them in advance -- frequently in bursts -- but most of the time, I only draw them shortly in advance of running on the site. So if a comic runs on Wednesday, I often only finished the art for it on Monday or Tuesday!

I do build up small buffers of comics ahead of times I know I'll be busy, like when I'm going to conventions or taking some kind of trip! But in this quarantine world, there hasn't been much call to do that... so I haven't! Never needing a buffer has actually given me the opportunity to experiment with working with varying degrees of impulsiveness, which I've found very refreshing. I still like to write my stories in advance, but there can be a fun energy to putting together an impromptu gag comic right when the idea is fresh and urgent.

All that said, I do famously hate missing updates. So yes, I do have a small library of completed extra stand-alone comics -- mostly bonus strips I originally drew for Patreon or Vote Dog -- that I can run in a pinch if I ever decide to take a day off. The only reason I didn't use one for my vaccine-day-off is, well... I just thought it'd be funny to make that comic with the reused art. (I guess that was it's own kind of impulsive decision!)

"How cannon can we consider this Twitter thread?" -Dawson

Haha! Well, I wouldn't want to take anyone's ideas to use in my work! But I also made a choice to mostly avoid describing any of the shows in the comic. I thought it would be more fun to just let people riff and imagine what they were like, and not contradict them! That's why the show that gets described in the most detail in that story is Bitey the Shark.  (I also coudln't resist providing a little more detail about Ratnut, because I love Ratnut. But we already know a lot more about that show than the others, since the character appears in the logo!)

-Sam Logan
Sam and Fuzzy Q & A:  Nail Edition
Got a question you want answered? Just drop me an email with "Q & A" in the subject line!