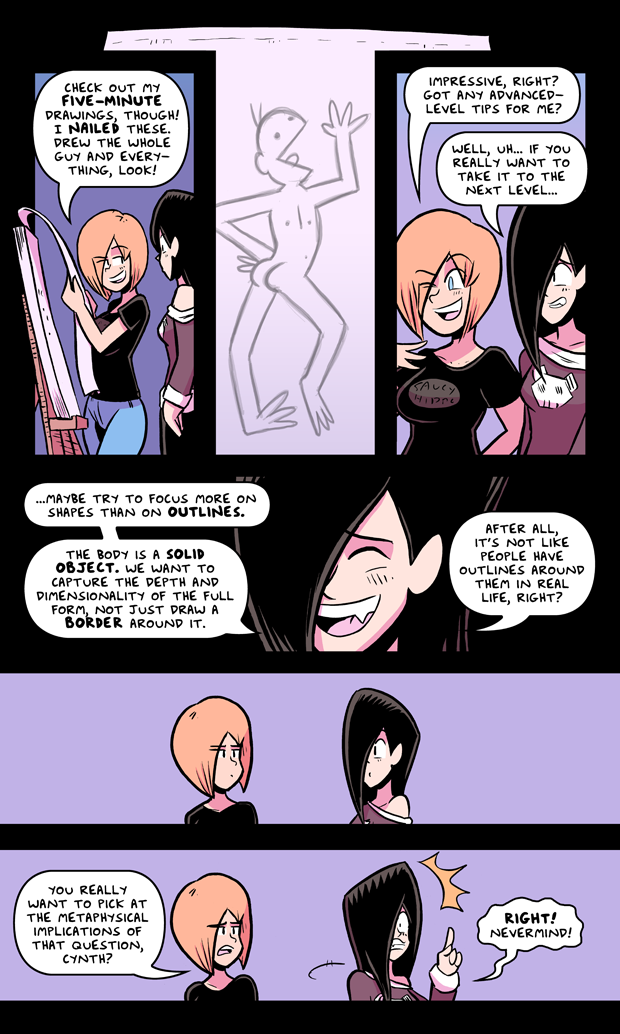 Don't think too hard about it, Cynthia!

"Are the current comics inspired at all by your own experiences trying life drawing?" -Josh

Only very loosely!  Like, I'm not really basing Jess Star's disasterous first class on my own first time doing life drawing. I kinda had my own unique problems, stemming from having spent many years drawing cartoons. (I drew all my heads way too big, for example, haha!)

That said, there is one particular comic next week that is directly inspired by a comment I got from an instructor at one of the first life drawing classes I did.

"Do you know who/what started the drawing of this particular gesture?

I remember first consciously noticing it while reading QC many years ago, and thinking 'what IS that gesture, and when and where did it start?' - it's such a particular sort of way to show disconcertment, but I see it across multiple comics. Is its origin in some kind of classic comic book series?" -Sakhr

This is an interesting question! It's definitely a stock gesture I am prone to using, but I don't really remember when I started drawing it. If i picked it up from other comics, it was probably unconscious.

To me, I just think of it as representing a person physically recoiling -- that is to say, literally pulling their upper body back away from something that makes them uncomfortable or embarassed. I have a few ranges of it, with the most extreme version being something like what Sam is doing in the last panel of this comic.

"Was the increasingly bad art in the blackout comic really caused by it increasingly darker, or did you fake that?" -L

OK, ok... that part was faked. I really did draw the comic -- the whole comic-- in the dark, during a blackout, with nothing but candlelight to see. But I drew the whole thing that way, in the same conditions for all four panels... they didn't get any worse. So to simulate drawing with reduced vision, I just started squinting more and more with each panel. Haha!

That's all for today, team! But come back on Monday for our next comic.