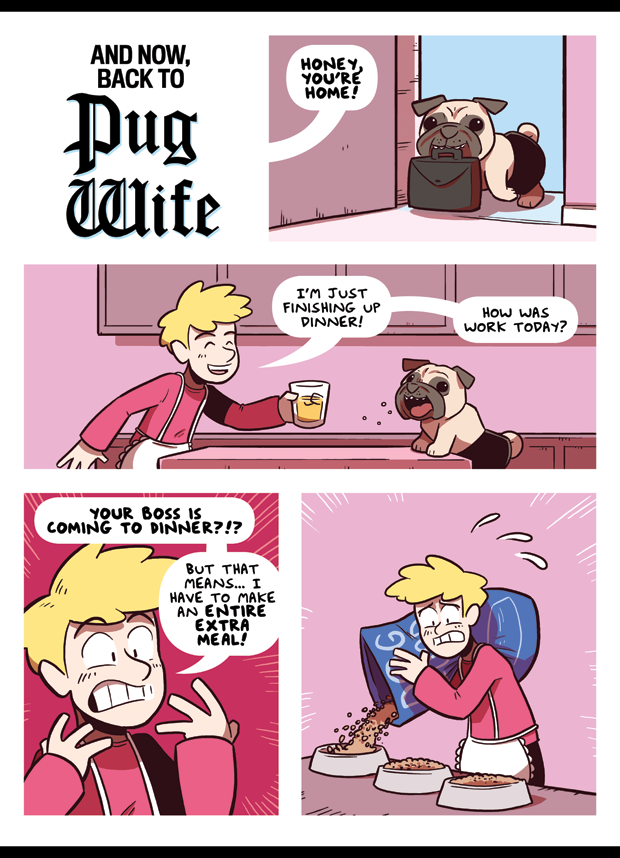 See? This is why they don't let me make sitcoms anymore. And also why they didn't before, either.

Anyway, that's enough Pug Wife. But come back on Monday for: some comics about Sam and Fuzzy, if you can believe it! I've got a previously print-exclusive story that I've been wanting to share here, and I'll have some fun backstory about its creation, too.

Taking a complete 180 from my remixed Saucy Hippo comics, let's break briefly for a little Pug Wife... another one of Bonus's great TV show ideas. (You can see the first Pug Wife comic here!)

This comic originally appeared in the Vote Dog book (which is available in print here or in ebook form here).

I like this particular strip ok, but what I really like is the joke it sets up for in the third and final Pug Wife comic, which I'll share with y'all soon. Also coming soon: some comics that take place during the earliest days of the Classic S&F era, and some extremely education content about Fuzzy. (If you have missed seeing Fuzzy, these comics will have you covered.)

All right! That's a wrap for Game Night. I hope you all enjoyed these two little "remixed" scenes. It was fun to make them! I've got more neat stuff lined up for you next, so stay tuned.

OBLIGATORY PLUG: These pages, in their original forms, were first published on the Saucy Hippo Patreon tier, where I post all my "r-rated" and "adult" comics and art. At this point, I've actually published over 100 pages of comics on that tier (as well as over 150 more pin-ups and illustrations). If you like my work, and also like saucy/adult comedic stories, you will probably dig them!  And if you don't like that stuff, I'm glad I was able to share these remixed versions with you here so that you could still enjoy all these stupid jokes.