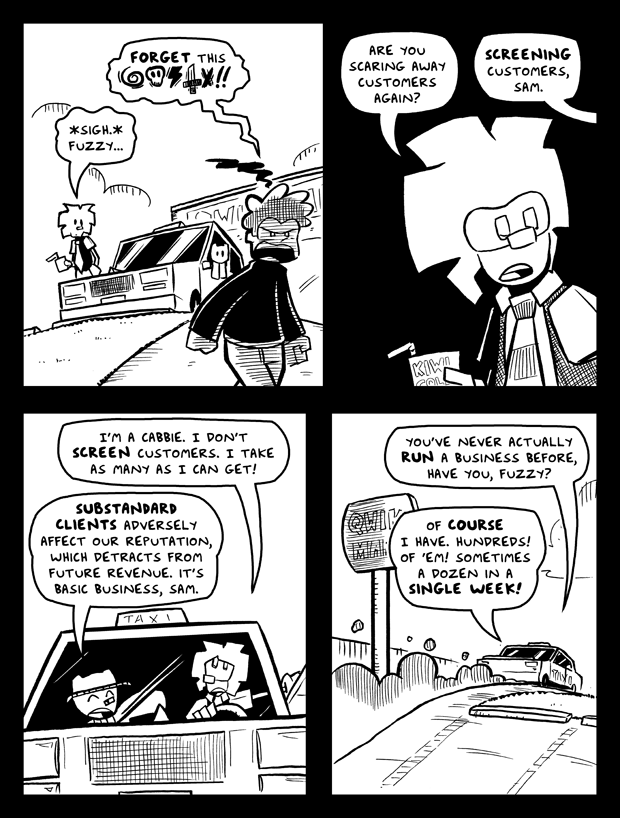 Time for a blast from the past! Self-Review is a story I originally created for the omnibus collection of the first 7 years of Sam & Fuzzy. (Available now in print and ebook form!)

For those who don't know, Sam & Fuzzy began as a gag strip in a student newspaper, then gradually morphed into a story-driven comic with actual continuity. Because of this, there was no real "intro story" to the comic that introduced the cast, setting, and basic premise. So, when I was putting together the book collections... I decided to make one!

Self-Review was a really interesting story to make! It was fun getting to go back and decide how I wanted to introduce new readers to Sam & Fuzzy. It was also quite a challenge to write and draw! This chapter would be appearing immediately in front of the actual original Classic comics, so I wanted it to feel like those strips -- not just the visuals, but also the grid-panel structure and gag pacing.

Anyway, while this story has served as an introduction to S&F for many book readers, it has never been published online before! So I'm happy to share it with you all now, and provide a little insight into how I made it. Come back on Wednesday for Pt. 2!

See? This is why they don't let me make sitcoms anymore. And also why they didn't before, either.

Anyway, that's enough Pug Wife. But come back on Monday for: some comics about Sam and Fuzzy, if you can believe it! I've got a previously print-exclusive story that I've been wanting to share here, and I'll have some fun backstory about its creation, too.