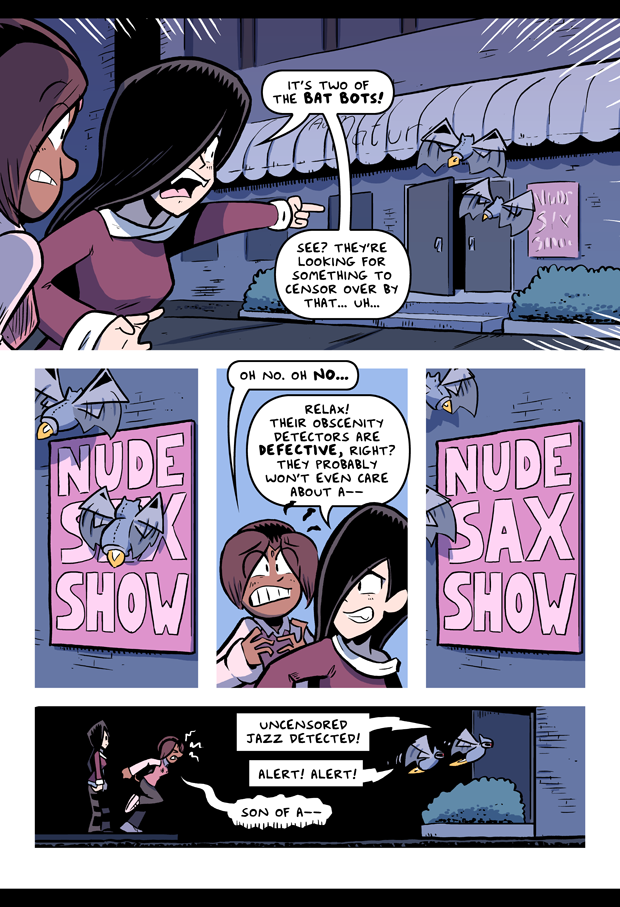 Sax on the beach

We return to Bats On, Bats Off -- picking up right where we left off last Wednesday. Hold on to your sax! This is gonna get weird.

Come back on Friday for our next comic. Woo!

Bats On, Bats Off returns on Wednesday! But in the meantime, please enjoy this special vocational feature. It collects a few of my favourite occupational side pieces from the last few years. (No, not that kind of side piece.)

I'm currently wrapping up my first (and hopefully not last) convention appearance of 2022. I gotta say, it feels really good to be back out there. But at the same time... boy, I forgot how much work these things are, haha! Or perhaps I just aged a decade or two during lockdown. Still, it's nice to see some of your (masked) faces again.

Here is the song that goes with these lyrics!

Things got a little hectic this week as I prepped for a local con this weekend! So to cut myself some slack, I have briefly paused Bats On, Bats Off for this exciting alternative programming.

I originally drew this comic for a Sonic fanzine a few years ago called Speedhog. Because as we all know, there is no medium better suited to music parodies than comics! Er... well, maybe not, but I still had fun with it. For those of you who are not versed in Sonic history:

-The little bossy guy at the start of the comic is Omachao! He is a robot who delivers annoying tutorial dialogue in Sonic Adventures 2, ala Navi in Ocarina of Time

-Sonic and Knuckles had a special cartridge that could "lock-on" to other game cartridges via a port in the top of the cart to unlock various bonus features. Sexy!

-I'm sorry to report that Sonic never actually gets to use a knife in a Sonic game. But don't worry... Shadow does!

-Sonic R was the only new Sonic game made for the Sega Saturn, Sega's N64/PS1 competitor. It was Sonic's 3D console gaming debut... but it was just a racing game (with only five tracks!). It was a pretty big letdown for anyone waiting for Sonic's "Mario 64" moment. It is mainly remembered for its insane music.

Of course, as a lifelong Sonic fan, I am actually the last person who would tell you Sonic died in 1997, and will hapily lecture you on which specific post '97 games I think are underated at any time.