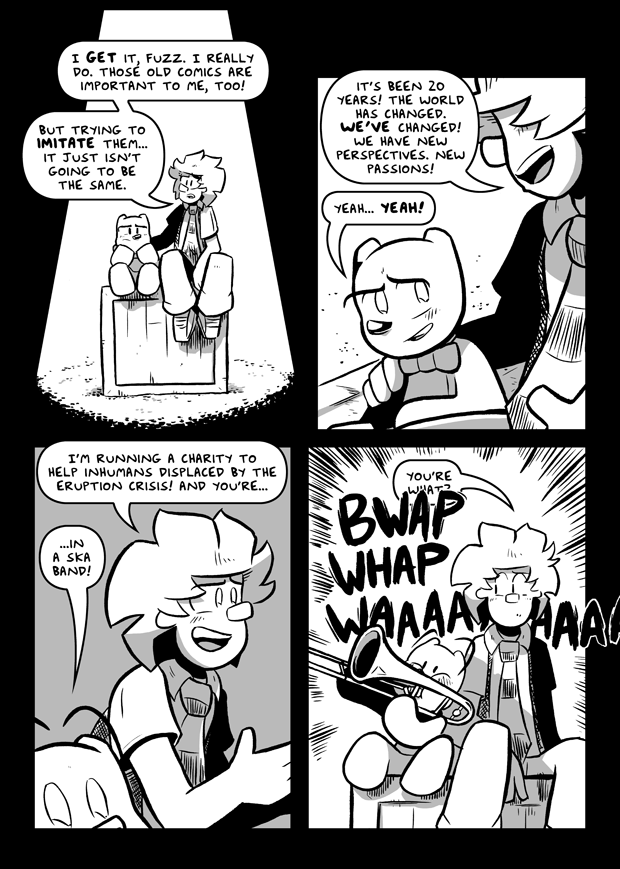 Just in case you did not know this about me, I both love ska and played the trombone. (Although I never played trombone in a ska band.)

Sam and Fuzzy Q & A:  Retro Edition
Got a question you want answered? Just drop me an email with "Q & A" in the subject line!

"[Re: our current storyline,] What's with all the different colors?  By my count, your allegedly "retro" panels are using 50% more colors than comicks from samandfuzzy.com's first third of existence.

Seriously, did you consider doing this current run in strict black and white?  Or was that never an option?  I imagine you've gotten so used to using shading to help stage panels and character interactions that you might physically recoil at the thought of posting your work without it.  Like it would just look so wrong/flat/incomplete without some gray." -Dan

Hahah! Truthfully, I never even considered doing this particular story without the single greytone. A strict black-and-white would definitely be more accurate to the look of the comic's early years! But then how would I have made Wednesday's joke? Plus, the comic features lots of characters and elements from throughout the series, and uses the current designs for the characters themselves. So I thought it would be appropriate to use a style similar to the one being used in the last volumes of the S&F series.

But! There was definitely an ulterior motive, too. Over the last couple of years, I've been experimenting with all sorts of different art styles and colouring styles, as well as different types of stories with different lengths of individual updates. It's been really fun, but also kind of exhausting at times, because it has made my workload a lot less predictable. There are definitely stories and pages where I have wound up overloading myself a bit to pull off what I'm going for.

So in a lot of ways, I designed this story specifically to give me an excuse to revisit my "comfort zone" art style and see how it feels to me now. For years and years and years, this was how I made comics! It's interesing to go back and remember why I liked working this way. I like the style, I'm very efficient at drawing it, and lets me spend more time drawing on paper and less time in front of the computer using Photoshop.

But I do really like working in other art styles, too! There's so much stuff I've been able to do with my colour work... and so much stuff I probably could do with my art if I was willing to explore a different updates schedule. Lots for me to think about, as I ponder some of the different stories I want to do in the future!

"Are you going to expand the Sam and Fuzzy Tabletop RPG to include life after the underground’s reveal to the world? Or maybe some campaign supplements that would take place in that setting if not expanded rules?" -Andy

I'm not sure, Andy! But I did run into one of the game designers at Gen Con this year, though, and he mentioned that he was interested in working on some new supplements that take place in the post-Underground-exposure setting. I guess we'll talk and see what happens!

"I used to ask q&a questions a lot, but this one is a trick I guess - you don't have to answer (except, to yourself?)

The question is, how are you? The end of the comic felt so emotional as someone who's been on that wild ride since the cab days, so it must have been for the person that, well, *made* the ride. You seem to be doing great though, and all the storylines since have been wonderful. Keep it up! " -Airyu

That's very sweet of you to ask! I'm doing very well, thank you. I have a nice life with a great fiancé and two lovely dogs. And I've been able to keep doing this for a living, which rules! I have not enjoyed the pandemic -- who has, lol -- and I've had to learn a lot about managing anxiety. But I'm doing much better at that now than I was in 2020.

I'm glad you brought up the personal aspect of ending the main story! I'm not sure I've ever seen an author express this sentiment exactly, but... finishing a big project is actually... kind of sad? It's kind of sad! I miss it. That probably sounds like an odd thing for me to say, considering I'm still making comics and telling new stories that revist the characters as much as I want. But I miss working on that specific story. It was such a long, long, all encompassing goal to write and draw my way towards that ending. It was a huge constant in my life, and there is still something very weird and unfamiliar feeling about having actually gotten there, even now.

Ending that story also probably wound up feeling extra weird because of the way it wound up aligning with the start of the pandemic and the loss of my old dog, Mac. Really feels like a ton of stuff all changed at the same time... a disorienting feeling for a real creature of habit like me.

That said, don't get me wrong... I'm very happy to be finished that story! I love that it's done. I feel incredibly fortunate that I was able to pull that thing off without running out of money or being hit by a bus. I miss the comforting feeling of having to work on it, but I don't miss it being unfinished. And I've really enjoyed the stuff I've done since. I'm glad you've been enjoying it, too! As I've mentioned above, I've been thinking a lot about the various stories I want to do next, and whether I need to make changes to my schedule to do 'em. But it's mostly exciting to think about. Only slightly terrifying. Haha!

This comic is dedicated to the one person who emailed me asking why these comics had grey shading. Now you know!

Come back on Friday for our next comic, and heck, how about a round of Q and A as well? If you've got a question you've been just dying to ask me, just email it to me with "Q and A" in the subject line. Pow!