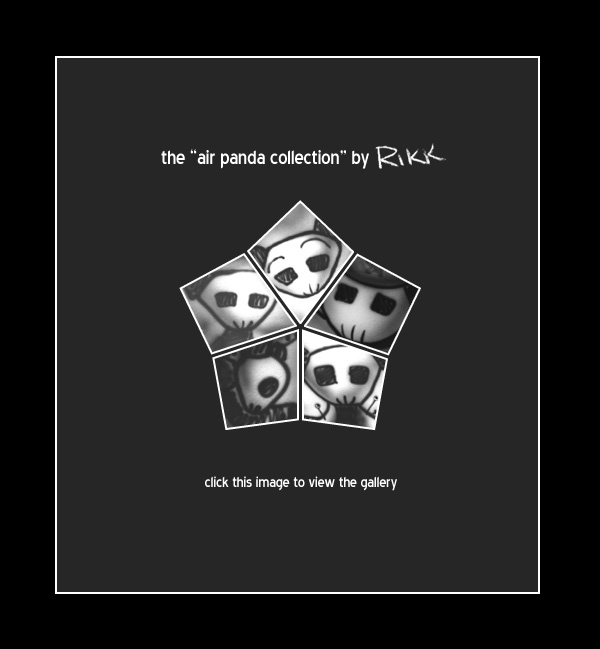 Most of the world nearly missed out on the "Air Panda" collection, which vanished from a little-known alternative art gallery in New York two springs ago. But these five 11 x 16 airbrushed pieces turned up on the auction block during the estate liquidation of the supposedly deceased Litchfield. Turns out old Litchy had been hoarding them in his basement all that time. I'm sure he'd claim he was "sparing the world" from the sight of my "regurgitated pop culture garbage," but more likely he was hoping to leech some inspiration from my genius. Typical Litchfield.

This massive update may seem appropriate for a grand finale, but I have one more piece left to share with you before I hand the reigns back over to Sam. You will be able to read and enjoy this final comic on Saturday. It is short, but oh so sweet.

A less-refined observer might call the art in today's comic "cartoony." But if you have even one cylinder firing in your undoubtbly vacuous skull, you'll realize these visuals were employed ironically to honour the work of my favourite relative. Other cartoonists usually make me want to rip off my ears and stab them into my eyes, but I've never had this problem with Great Uncle Welton. Perhaps it is because he hasn't actually drawn any comics since 1907. If only all the hacks working today were so generously unproductive!

But at least some artists are wising up. I hear that Scarygoround's John Allison proclaimed on his website that he really "identified" with yesterday's comic. I seriously doubt that any so-called "webcartoonist" could appreciate the many layers of rich symbolism in that work, but at this point I will take what I can get.

What is love? A chemical reaction? An artificial significance ascribed to instinctual physical comforts? A capitalistic lie endorsed by opportunistic greeting card companies? A tool for lazy songwriters? A town in Saskatchewan? Seven points in Scrabble?

Speaking of love, Sam's inbox tells me that some people believe his girlfriend Claire was responsible for yesterday's strip. Do you people even listen to yourselves? On the rare occassion that an artist's portfolio shows any diversity, everyone accuses each work of being produced by a seperate person. What a sad commentary on the state of the comic industry today. I think I will go cry in my inkwell.