Sam and Fuzzy Q & A:  Fan Art Edition
Got a question you want answered? Just drop me an email with "Q & A" in the subject line!

"You've been posting a lot more fan art lately on Twitter. Any particular reason for the increased interest in fanonizing?" -Jason

To be honest, I am just trying to be better about posting more of all the different kinds of work I like to do! So I've been trying to use my Instagram, Twitter, and Tumblr to share a more stand-alone drawings in general... be they fan art, animal drawings, or pin-up stuff. (Although I am still kinda trying to figure out how to best handle the pin-up stuff, since it skews a little older than my other work.)

In the past, I have not always been great about making time to draw things that aren't specifically "for" the comic itself. That's something I've tried to be better about this year! Patreon has been great for that -- the monthly rewards ensure that I draw several stand-alone pieces and a few pin-up drawings each month. (Some of those drawings are backer exclusive, of course, but some of them get shared eventually!) Inktober was also a fun excuse to make time for a bunch of different things. So I guess I am just trying to fit more excuses into my schedule!

"If the committee placed Keller in charge of the Mafia in order to shut it down, does that mean they also invalidated Sam's nomination of Gert as his successor? She is qualified to run it. Is the Ninja Mafia officially gone now?" -Justin

Keller has not actually been placed in charge of the Ninja Mafia itself. The Committee just charged Keller with occupying the Mafia HQ base in order to seize all Status Quo violating technology. Keller also lured away a number of former Ninja Mafiosos to come work for his own gang. But once the seizure is complete, Keller will leave Mafia HQ.

Sam's problem is that his claim to the Ninja Mafia throne is invalid according to the Mafia's own internal laws. He didn't really kill the previous Emperor, and now everyone knows it. Most of the more mercenary troops started jumping ship as soon as the money ran out, but now, even the most loyal traditional mafiosos have no reason to stick around. So once Keller leaves Mafia HQ, the base will be left mostly abandonned, like it was the last time the Mafia fell apart.

And because Sam never actually was the rightful Emperor, yes... that means he never had the right to appoint a successor, which is why Gertrude's own claim is now invalidated as well. According to Mafia law, the last person with a valid claim to the throne was the previous Emperor's true assassin, Candice. So the line of succession died with her.

Mind you, that doesn't mean that someone else couldn't come along and start their own new mafia full of ninjas, like Mr. Black did. It would just technically be a new organization, rather than a true continuation of the old one, with all the pros and cons that come with that.

"Who got Dr. Crab to join the 'take down Rexford' effort? Was he recruited by Sam during his recruitment spree? Or did the Grrbils 'pick him up' independently of Sam's noble efforts? Because honestly, while it makes a little more sense to have him join on Sam's urging, it seems much more likely to me that the Grrbil's decided they might need extra 'persuasion,' saw Dr. Love on TV, and shoved Dr. Crab into a box against his will [...] and his whole speech about reverse psychology is just him rolling with it and pretending it was his plan all along (something he is great at)." -Dawson

I assumed it was just calling in a favour -- a lot of Sam's recruits are people that NMS helped in previous stories. But the "abducted by Grrbils" theory definitely has a strong appeal of it's own. You have my permission to headcanon this one to your own personal preferences!

That's a wrap for this week, team. See you on Monday with our next comic!

Hey, team! Just a friendly reminder... not only do I have a wide variety of new and classic shirts, posters, stickers and other swag available in my Topatoco store, but I'm also selling the Omnibus I & II set for an astonishing 50% off. That's two giant books for the price of one, son. It's madness!

We return on Friday. See you then, y'all!

Who could forget Dr. Crab? (AKA Dr. Love?) Not you! No matter how hard you try.

A brief suggestion for anyone who was thinking of commissioning some custom artwork for the holidays: let me know sooner rather than later! I take commissions off and on all year round, but if holiday delivery is important, things will start getting a little dicey once we get into December.

My most common commission request these days is pet portraits, like this buncha cuties. But of course, I'm also happy to do custom S&F stuff, charaters, pin-ups, portraits, and a pretty sizeable portion of whatever else you can think of. And I can either mail it to you or -- if it's a gift for someone you won't be seeing in person -- directly to someone else! Just drop me an email if you're interested. 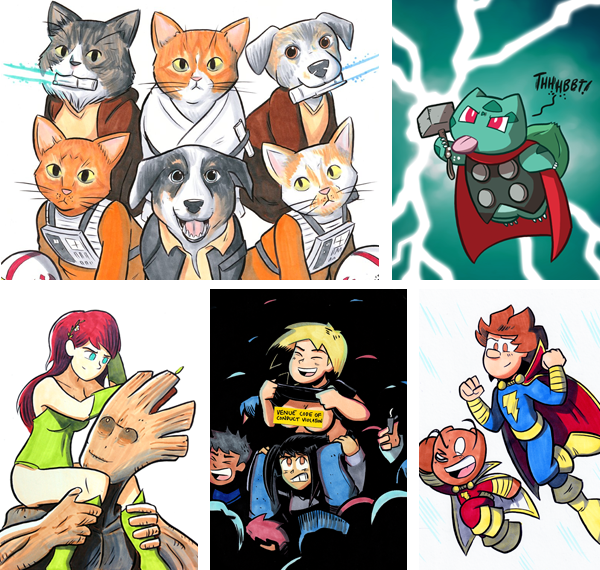