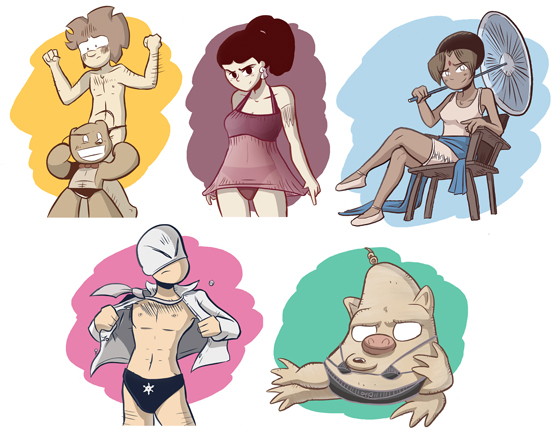 Friends! I am excited to report that I have, not one, but two brand new shirts on sale.

For those of you who demanded it, I've made a new Ninja Mafia shirt based on the coat-of-arms image from our last book club bonus pack. This was something a lot of you said you wanted, so... uh... I hope you weren't lying! The limited-palette design It does look pretty classy in shirt form, I have to admit. (As classy as a shirt with ninjas on it can get, at least.)

And for all the Buddy fans out there, I give you When I Am Free You Will Pay For This Indignity. I spent a lot of time on this design to make sure it had the just the right balance of goofy, ominous, and bonk. I hope you all like it!

As usual, both designs can be found in the Sam and Fuzzy Topatoco store, along with my other shirts, my books, and my various other stuff. And also as usual, picking up any 3 shirts will net you a $5 discount. And that's any three shirts on the whole site, not just mine! (Although if you want to get three of mine I certainly won't complain.)

Anyhow, that's a wrap for today! Come back on Friday for another new comic full of jokes, action and horrible trauma.