Fangs for Nothing, Pt. 4 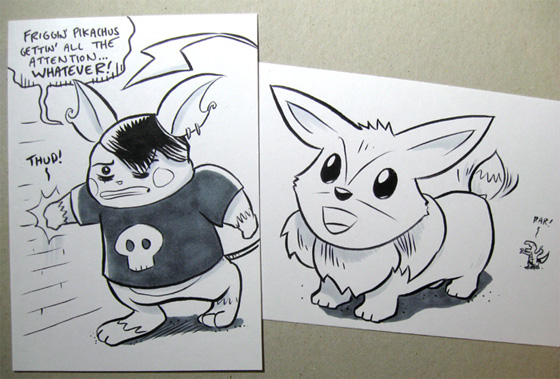 Since I was exhibiting at last weekend's Vancouver Gaming Expo, I decided I wanted to make some thematically appropriate prints to bring along. The end result was the following collection of six dumb Poké jokes. (Henceforth referred to as "Jokemon"... *rimshot*.)

For those of you who couldn't make it to the show (ie: the vast, vast majority of you), I've made a little page where you can order them online! If it is your wish, you can nab all six is $25. Woo!

I know some of you will be bummed that I'm not selling them individually, but sadly, there isn't really a good way to sell such small-ticket items by mail order that isn't impractically labour intensive and goofy to ship. Besides, they make a cute set, and the ones you don't like can make excellent gifts, table-levels or kindling. (I suppose if you really, REALLY only like one, you can email me and we'll see if I can make you a larger-sized $12 version, like my Ninja Turtleducks print.)

In other art news, there are still a handful of Halloween sketches left! Here's one last preview pic of the last sketches standing.

Whew! Art. Sorry to prattle on about it for a whole newspost. Maybe I draw... too much.

The Vancouver Gaming Expo starts tomorrow! If you're going to be there, you can find me in the dealer's area, peddling my Sam and Fuzzy swag and some special exclusive gaming-themed prints and original drawings.

Sam and Fuzzy Q & A: Vampire Edition
Got a question you want answered? Just drop me an email with "Q & A" in the subject line!

"So does the return of Edwin we're taking a look at the surface now and possibly finding out how things played out with Dev and Nic soon?" -Nathaniel

Let's just say odds are high that we'll be seeing more of both of those characters at some point. As for when, where, or how... I wouldn't want to spoil it!

"Why can't Fuzzy and Sin just smuggle Fangy out of the mansion and show him to the committee? Surely this would be perfect proof of Brain's brain leeching thing, and would convince the committee, or at least MOST of the committee to vote in his favour?" -William

Not a bad idea! But despite the temporary success of Sin's ridiculous vampire costume, I don't think he'd have much success getting Fangy out of the house when so many of his people are keeping an eye on him and trying to keep his condition a secret. (We'll actually be seeing more of how the vampire's handle the "Fangy situation" in future strips.)

"Is that Emily Dupont in the McBats family meeting? That is some vertical hair right there." -Alexander

Ha! That was actually my attempt at recreating the Bram Stoker's Dracula hair from memory. I see now that I remembered it being much pointier than it actually was!

Emily Dupont, on the other hand, isn't intended to be a vampire, but I was definitely shooting for a vaguely vampiric look when I was designing her. She's a scary lady!