Team: I have put a few of my original marker illustrations up for sale in my Etsy store! A couple of them are from the Kickstarter sketch-off, and the others were drawn during my recent summer convention tour. You can check 'em out, and nab one if you want, by clicking the image below. Pow! 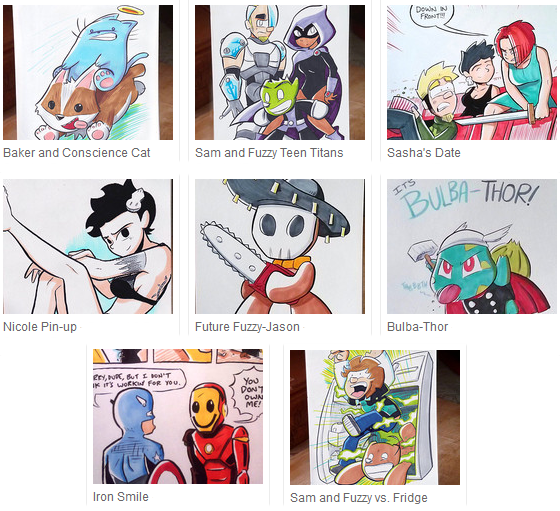 As always, I'd be happy to sign and/or write a personalized message on your drawing, if you'd like. It's going to be a little while before I can take on regular commissions or do Sketch-Offs again -- I have to finish the drawings I sold through the Kickstarter first -- so if you're looking to score some original artwork in the near future, this is your best bet!

This weekend, I read Petrograd... a really killer graphic novel by Phillip Gelatt and BPRD-artist Tyler Crook. It's about the conspiracy to assassinate Rasputin, told from the perspective of a British spy. This book wasn't on my radar at all when it was first released... which is a shame, because it's really good. You should check it out! CBR has an older review with a few sample pages, if you're curious.

In other news, WayForward... the folks who made the incredible Mighty Switch Force games and the DuckTales remake... are kickstarting a new game! Wayforward makes some of my favourite 2D platformers -- especially when they are working with their own original characters and game mechanics -- so I am crossing my fingers for this one.

Sam and Fuzzy Q & A: Countdown Edition
Got a question you want answered? Just drop me an email with "Q & A" in the subject line!

You are not crazy, Jake! It did originally say two days. These comics are, as you said, effectively counting down to the day of the job, and when I was lettering that strip, I accidentally miscounted how many strips were left. Whoops!

"So in the current chapter, Four-Finger Discount, every strip has started with a close up of someone's eyes. Is this just coincidence or did you draw it this way on purpose? If that is the case, do you always do similar things in each chapter? " -Ian

It is not a coincidence! (As you've probably guessed yourself, since I kept doing it for several more strips after you asked.) It's a narrative device, to show the days and events leading up to the job from several characters' perspectives, while emphasizing that the clock is ticking.

I've done similar "countdowns" in other chapters, but using narrative captions ("three days ago", "two days ago", etc) to mark the passage of time instead of this repeating intro shot and dialogue device. Doing it this way is maybe a little on the nose, but I kinda like how it turned out anyway.

"I remember reading a year or so back that you came out to Winnipeg for a convention. I was wondering how that went?" -Maegan

That con was Central Canada Comic-Con! It went pretty well, actually, and I had a lot of fun meeting some of my Manitoba fans, but I'm not going to be there this year. Unfortunately, it's very expensive to fly to Winnipeg from Vancouver, and this fall I'm going to be super busy drawing things for our kickstarter backers. I'd like to be able to attend again someday in the future, though!