Sam and Fuzzy Q & A: Conned Out Edition
Got a question you want answered? Just drop me an email with "Q & A" in the subject line!

"On this page, Blank seems to be attacked by Brain going for a full memory-wipe. Did it not work because Blank threw him off too quickly? Or does he have some Sin-like protection? " -Jamie

No special protection! Just a mask and quick reflexes. Brain didn't get a chance to really get his hooks in and start influencing his behaviour.

Side note: this scene, along with the later attack on Mr. Rexford, were intended as early clues to Brain's real abilities. With Mr. Blank, we saw a failed attempt at a full wipe... or as Hazel calls it, the "full treatment". With Mr. Rexford, we see the successful erasure of a single memory... although readers didn't know that was what they were seeing at the time!

"Why does Gertrude have Sam's back instead of his ass? After her last
meeting with him, she muttered 'You owe me big time for this one,
Sam...', but given their history, there's been a lot piling on before
that. She's been trained to be the emperor (of a non-joke Ninja Mafia), not a
loyal thane. 'You owe me for this' is totally in a different ballpark
from 'You'll pay for that.'" -David

Gertrude's in a pretty different place these days. At the conclusion of the Noosehead arc, Gert made peace with Sam, abandoned her childhood quest of becoming Ninja Emperor, and hit the road to find a new purpose for herself. Since then, she's built an empire of her own, as the owner of a massive network of underground bars and burlesque clubs. (We haven't seen much of it yet, but it's something I hope to visit more in future comics!)

Gert doesn't have any designs on the Ninja Mafia anymore. She doesn't even want to be involved. She has her own life to take care of. She's strictly there helping prep the cadets as a favour to Sam. And now, it would appear Sam has overstepped the bounds of that favour and ticked her off. We'll find out what means in future comics!

"if vampire bites turn people into werewolves, where do new vampires come from?" -Keith

Well, Keith, when a mommy vampire and a daddy vampire love each other very much...

Oh shoot, out of time! That's a wrap for this week, team. See you on Monday!

Speed lines! They are like tunnel lines, only straighter.

We return on Friday with our next comic and our latest round of Q and A. If you've got a burning question you want answered, just launch it my way in an email with "Q and A" in the subject line!

Thanks to everyone who tuned into the Commission of Fate sketch-off on Friday! I had a lot of fun chatting with you all while I drew stuff. Let's do it again sometime!

Most of the drawings I drew were for kickstarter backers, but I did manage to do a few smaller pieces as well! As usual, I'll be selling the originals for $25, or $50 if you'd like me to marker-colour it. (Or if it is coloured already!) You can see all the pieces I did by clicking the gallery link below: 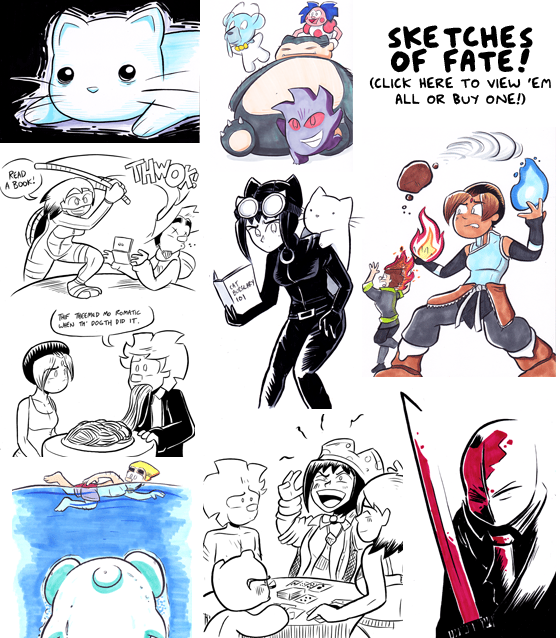 If you'd like to nab one, just drop me a line!