Thanks for all your support so far for the release of Volume 4! As always, I'm touched and slightly overwhelmed.

A number you have jumped on the special limited bundle, which means I've got a bunch of character portrait commissions to make. (Some were specific requests, while others will require the use of the chart of fate!)

So, I've decided to thrown an impromptu livestream today while I draw 'em! It starts at 1pm pacific time (4pm eastern). I'll be streaming a videofeed live on livestream, and also posting the finished pieces on twitter.

Here are some character portrait examples from past sketch offs, if you're curious: 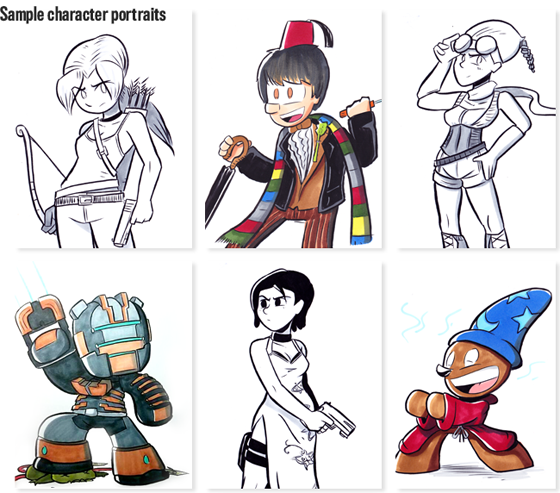 All right! The latest Sam and Fuzzy print collection, Sam and Fuzzy Ruin Everything, is now available! As with the previous three volumes, the book is available in both a regular edition and an Artist Edition that includes a hand-sketched bookplate on the inside cover. But this time around, I also wanted to do some of the fun stuff we did for the Omnibus kickstarter!

First off, like the Omnibuses, every version of Vol 4 contains an exclusive bonus section featuring author commentary and concept art. "You should do a section like this in all of your books!" said everyone. Fine! But only because you asked nicely.

Second, for those who like original art, I'm once again offering a Limited Bundle that comes with a custom art commission. And once again, if you choose, you can have the contents of your commission dictated randomly by the use of some dice and a chart. (But you can also pick the character and costume yourself, of course.) This bundle also comes with a bookmark and a button, and is only available until November 1st. 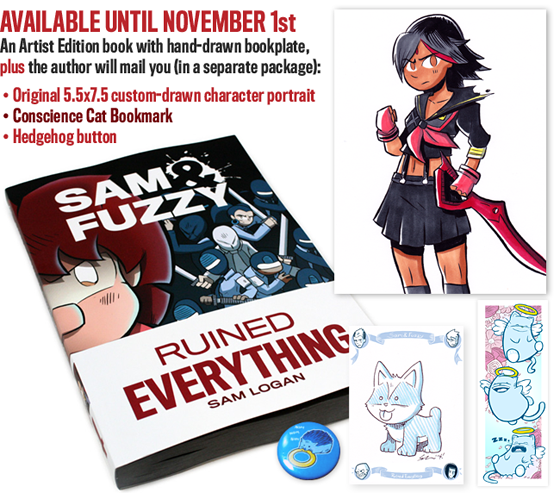 Third, I will once again be sending free digital bonuses to everyone who buys a copy of the book before Nov. 1st. To start, our digital bundle includes a free PDF ebook copy of Ruined Everything, as well as two new desktop wallpapers.

But this time, I will constantly be adding even more digital bonuses to the digital bundles all month long, to generate a little something I like to call: arbitrary hype. Think of it as the entire year of Book Club bonuses compressed into one enormous, out of control bonus pack. I don't even know everything I'm going to put in it! I'm just going to follow my heart. But I will let you know each time I add extra swag to it. 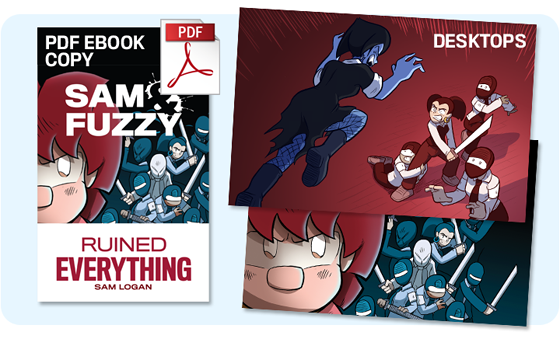 And last but not least, for the rest of the month you'll be able to add-on our other books or omnibuses to your Vol. 4 order at a discounted price. I know books can be a big investment -- especially if you are shipping internationally and buying a two volume hardcover set that weighs ten pounds -- so I hope this is at least a little helpful.

I know a lot of you guys were really keen on the crowdfunding experience we had with the Omnibus! I was too. A lot of readers and other artists have suggested I switch to using Kickstarter for all my books. But I would like to save crowdfuding for particularly unusual, complicated or collaborative projects. So what I decided to do here is just bring some of that fun bonus-adding mayhem and custom art-drawing and general "event" insanity to a regular book launch. Let's see what happens!