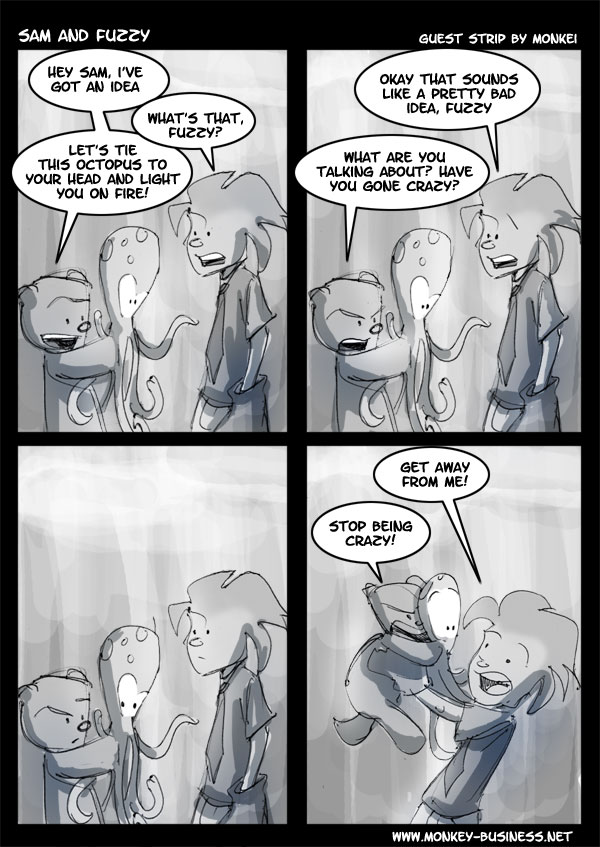 Everybody's got something to hide except for me and my monkey
Today's strip comes from Karl Wang, AKA Monkei, of the inspiringly random and randomly inspiring Monkey Business. If you haven't seen Monkey Business before, I definitely recommend checking it out. Each individual strip is fashioned out of six cans of concentrated awesome.
If you didn't catch the season premier of 24, I feel really, really bad for you.
Sam Logan

In the afterlife you could be headed for the serious strife
Today's spiffy comic comes from Tim Buckley, and thus once again I find myself linking to his gamer opus, Ctrl Alt Del. I have linked to this man's awesome comic so many times in the past that I am probably starting to sound like a broken record. But hell, when have I let that stop me before? Ctrl Alt Del Ctrl Alt Del Ctrl Alt Del! AHAHAH!
HACKSAW!!!!!
Sam Logan

RIP George Mason
Today, Scary Go Round's infamous John Allison gives us an inside look at the world from Fuzzy's perspective. Mind you, trying to get into Fuzzy's head and think like he does is not something I would generally recommend people do. But John A lives for danger. That's probably why they call him Dangerous Johnny.
Don't forget... tonight is the season premier of 24, or as I like to call it, the Bauer Power Action Hour! GET ME A HACKSAW!
Sam Logan