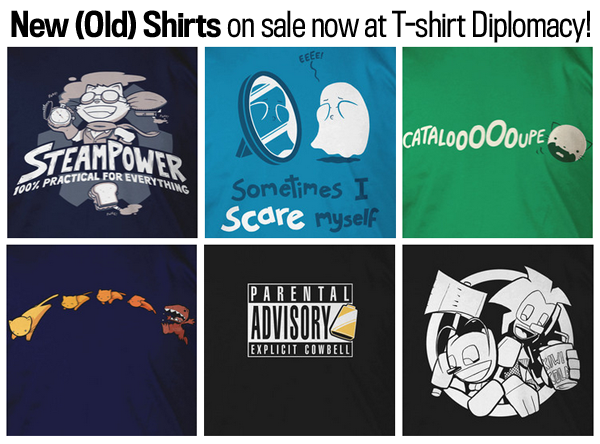 Sam and Fuzzy Q & A:  Roan Edition
Got a question you want answered? Just drop me an email with "Q & A" in the subject line!

"I wanted to ask what gender (and sex, if it's appropriate) is Roan? I initially thought she was a cisgender woman, but with Fuzzy calling her a "dude" and her chest drawn very flat in the last couple of comics, I'm wondering if she is a transgender man, or agender? (Or maybe just a shape shitfter with boobie powers like Jess)?" -Agni

Roan is a trans dude whose previous appearances (which were all flashbacks to 8 years ago) were all pre-transition. If this was a story about old pals bumping into each other at the mall, Roan and Hazel might have talked about this over coffee. But unfortunately for them, it's a story about bitter rival thieves who would rather talk about macguffins and how much they'd like to murder one another. So I decided I'd just present everyone as they are, without any contextually inappropriate exposition, and just roll forward from there.

(This seems to have made some people very happy and some people a little confused, which is pretty much business as usual around here!)

"I was just wondering about your commissions. Is there a certain time of year that you would prefer to get requests over email? Right now your probably doing some conventions, and between that you have to work on the comic also. So the last thing I want to do is throw a request at you and add to you to-do list.

Speaking of commissions. If I see you at a convention and request you to draw someone else's character your style. Do I need to bring some kind of reference with me or do you just use your smartphone to look that character up?" -Brodie

I take commission requests pretty much any time! There's no particular time that's especially good or bad, although it tends to be busiest towards Christmas. Once I wrap up the RPG gamebook this weekend (YAY!), I'm going to be spending the next couple of weeks finishing up the commissions for kickstarter backers. But I'm always happy to insert new folks into the queue for afterwards. Commissions are fun!

As for reference at conventions, either option works fine! A lot of the time -- particularly when I'm drawing people's pets -- I get them to load up a photo on their phone, and then literally take a photo of their phone with my phone. You'd be surprised how well that works!

"I just bought the Omnibus thanks to the awesome sale, and it got me thinking about someone we haven't seen in a while, Rikk. Because he just occasionally showed up with random Skull Panda comics, I had a thought once and I haven't been able to shake it in the many years I've been reading this comic. Is Rikk a real person? You talk about him like he is, but I've always wondered if he's really just a fictional 'character' you made up to explain the craziness that is Skull Panda." -Matt

According to Rikk Estoban, the Sam and Fuzzy universe's cartoon character Rikk is a grossly innacurate parody of the real person. I am too afraid of him to disagree.

A new comic arrives on Monday. See you then!