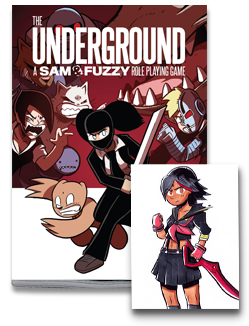 Holy smokes, you guys... a bunch of rad new Sam and Fuzzy swag is now available!

First of all, The Underground: A Sam and Fuzzy RPG is now available for non-kickstarter backers to purchase! For those who don't know, this sucker is both a fun tabletop game and a detailed, lore-drenched guide to the world of the comic. And it's loaded up with new stuff, including a brand new 4-page intro comic and over 100 new character illustrations! (Including this lovely montage of Mr. Sin heads.) The physical version of the book is available at Topatoco, and the PDF ebook is for sale on Gumroad!

Like we did with the release of Volume 4, I'm doing a temporary promo where you can get a custom-drawn art card with your book! You can pick the character of your choice, and if you like, a costume or genre theme for the illustration as well. (And for those of you who already got a copy of the RPG via kickstarter, but would still like to get an art card, don't worry... I've made a page over here where you can get them by themselves for the same price.)

But that's not all! In addition to the game, we've also unleashed two fabulous new t-shirts! Ethics Are For Humans is our long awaited Corporate Cat shirt, while Elf By Day, Night Elf By Night is either a gritty 80s fantasy thriller, a prog rock concept album, or a way of life. I hope you guys dig these designs! I think they are some of my best. And until Sunday, Topatoco is offering them both at $3 off the regular price! 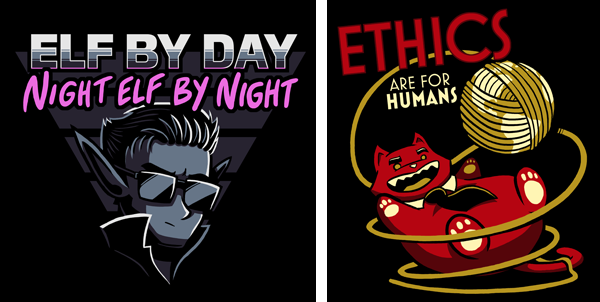 "How do tree penguins get into trees?" -Luke

Very easily! (It's the getting them out that's the tough part.)

Obligatory plug: Tree Penguins are, in fact, one of the 40+ enemies included in The Underground: A Sam and Fuzzy RPG, which is on sale RIGHT NOW!

"In this comic, Roan asks Hazel if he is 'not your type anymore' and Hazel gets very annoyed and insists Roan would know that isn't true. Does that mean Hazel is bisexual?" -Emily

Personally, I actually think Hazel is asexual. I just don't think she's aromantic. Make of that what you will!

"What do you use to ink your comic? I know you still work on paper. Do you use brushes?" -Dave

I use brush pens! Specifically, either Staedtler Mars Graphic Pro Duos or Zig Art and Graphic Twins -- the two pens are completely identical and are just sold under two different brand names.

There's nothing particularly special about them... they're not especially expensive, and they don't last an especially long time. But the brush tip is firmer and more rubbery than a lot of other brush pens. Some people prefer a pen that tries to emulate the feel of a brush more closely. But personally, I prefer the rubbery tip because my hands are a little twitchy -- a more rubbery tip doesn't require as delicate a touch as an actual brush, which means that I can push harder on the pen (to keep my hand steady) and still get a reasonably thin line.

We return on Friday, with a new comic and the return of our Q and A feature! If you've got a question you'd like me to answer -- about Sam and Fuzzy, comics in general, or the world beyond -- just pop it in an email with "Q and A" in the subject line.

We're done shipping RPG kickstarter rewards -- to everyone who has provided us a mailing address, anyway -- and backers are already starting to recieve them! It is an exciting time to be alive. For those of you who missed out on the kickstarter, we'll be making the RPG available for new folks to buy in the very near future. Anticipate!

And of course, we'll also have the RPG at our booth at Gen Con at the end of July! (We'd be fools not to.) I hope to see some of you gaming enthusiasts there!