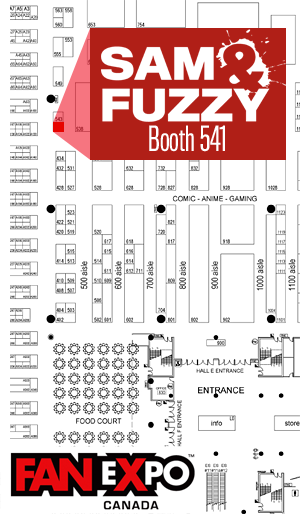 Torontoian friends! I am in your fair city this weekend for Fan Expo Toronto! And I hope to see at least some of you there.

If you're going to be at the show, be sure to swing by booth 541 (same spot as the last few years) and say hello! As always, I'll have a broad array of books and shirts, and I'll be doing plenty of custom art. I also have a couple of secret con-exclusive posters this time around... ooh, ahh!

Because I'll be knee-deep in Fan Expo madness, there won't be a new newspost on Friday. But there WILL be a brand new comic, as always! So come back then. (I suspect you will probably want to.)

Welcome to a new week of comics, team!

Today I am busy prepping for this weekend's Toronto Fan Expo. But not to busy to bring you your three regular weekly doses of Sam and Fuzzy... including an extra large one on Wednesday! Hope you enjoy.

Sam and Fuzzy Q & A:  Brain Edition
Got a question you want answered? Just drop me an email with "Q & A" in the subject line!

"Is (was) Brain actually a part of Hazel's brain? Like, does he somehow have control over her knowledge/memories?" -Agni

In seriousness, though! The relationship between Hazel and Brain will be explored more as the comic goes on. I can't talk too much about that, though, because I wouldn't want to spoil anything! But I will say: they are definitely distinct individuals. Brain's not psychically mind-controlling her or anything. If he wanted to alter Hazel's memories, he'd need to do it the same way he does it to everyone else... by hopping on her noggin and using his creepy powers.

"What happened to Butcher and Alphonso's kittens?" -Olivia

Sidney has them! He took them, and Butcher, in when Sam became a roadie. The rest of the band took care of them during his fake death. (Presumably, at the end of the Noosehead arc, Sidney reclaimed the kittens while Sam took Butcher back.)

"I've got a question about The Underground (the RPG).  Are you planning on releasing any more books?  Maybe writing some long adventures/campaigns for those of us who aren't good at that kind of thing?" -Darius

I am not sure if we'll do another full actual book, but we've been considering doing some smaller digital expansions, like more pre-written adventures. Is that something that would interest you guys? Let us know!

Our next comic drops on Monday. See you then!