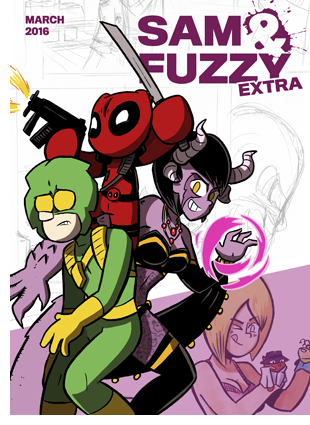 Meanwhile, from today until Sunday, I will be running a Sam and Fuzzy dealer booth over at Vancoufur! I've never tried to peddle my wears at a Furry convention before -- or indeed, attended any kind of Furry function whatsoever -- so I have absolutely no idea how it's going to go. But I'm hoping to see some friendly faces, and maybe find a few folks willing to commission a character drawing informed by my experimental new dice-powered Randomized Sonic OC Commission Generator.

If you're curious to see what happens, I will, of course, be chronicling the experience in real time on twitter! And if you're going to be at the show, be sure to come by the booth and say hello!

We return on Monday with a brand new comic strip. See you then, team!

How's it going, team? Did you have a nice day? I spent most of mine folding hundreds of t-shirts for the upcoming convention season. Ahh, the glamourous life of a webcartoonist!

Anyway, here's a slightly-longer-than-usual comic for you, team! There will be an even longer one on Friday. See you then!