The Saucy Hippo is a classy joint.

I'm feeling a little under the weather today, team, so on that note I think I'll take my leave! But I'll be back on Friday with a new comic, and most likely a new round of reader Q and A as well! (If you've got a question for me, pop it in an email with "Q and A" in the subject line, or just fire it my way via twitter!) 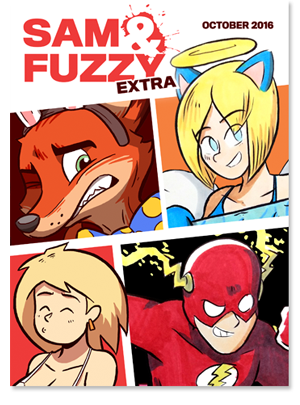 Sam and Fuzzy Q & A:  Jim Edition
Got a question you want answered? Just drop me an email with "Q & A" in the subject line!

They call him MR. JIM. Also Rauf. Also a lot of things.

"Are you ever going to draw any more comic-form burlesque acts like the ones in Headcanon 2? I mean, surely the "Booty for Booty" pirate is just one of Jess's many routines." -Max

I am not sure, to be honest!

For those who don't know, Headcanon II contains seven 3-5 page comic-style burlesque performances (one for each Jess, Gert, X, Y, Dev, Sam, and Nic). They were a riot to make, and a fun way to inject some humour, personality, and slight narrative into pin-up style art, rather than just drawing a bunch of stand-alone poses.

I don't think I'd want to do a whole other pin-up book themed around burlesque performances, though. I'd want a new book to have it's own theme! But it might be fun to do another routine or two as stand-alone things, if I can find the time/economic incentive to cram it into my scehdule. Maybe a Patreon thing? Not sure. I'll think about it!

"Does it ever bother you that all your books are of slightly different heights?" -Caleb

If it did, my entire graphic novel shelf would drive me crazy! Here, for example, are the tops of some of my Daredevil TPBs:

Here's a little insight into the book manufacturing process, for anyone who doesn't know but is curious. Books are only trimmed down to their finished size after they have already been printed and bound. Prior to that stage, they have a bunch of excess paper around the outside edges, called a bleed. There's a whole bunch of reasons why books are made this way, but the relevant one here is that trimming a book post-binding is the only way to ensure all the pages are exactly the same size as one another, with none of them slightly sticking out.

Although book trimming is pretty accurate, it is not perfect, and there is some slight variation from copy to copy (or at least, from batch to batch) depending on how the trimmer was set up. This variation, as long as its within a narrow enough range, is considered normal in the industry... and thus, you'll see it with basically every series of same-sized books ever printed. Sam and Fuzzy is actually pretty consistent compared to a lot of others (although Volume 2 was generally trimmed a little tighter than the rest).

Long story short, it's all part of the magic of physical book-making!

OK, friends. That's a wrap for this week. But come back on Monday for our next comic!