Just a reminder: The Sam and Fuzzy Omnibus I & II set is currently on sale for 50% off! It's available in both hardcover and softcover form, and collects the entire first 7 years of S&F: the complete Classic and Nooshead sagas! (As well as a ton of exclusive bonus material, including a new intro story, author commentary, and tons of other stuff.)

The sale only lasts 'til the end of January, so if you want 'em, act accordingly. Woo!

Hey, guess what? This month's Patreon backer rewards are out now! There's a new vote for bonus art for all our backers. And for higher backers, there's a new issue of S&F Extra packed with fun making of features, and new Art Vault updates.

And for Saucy Hippo backers, there are 4 new pin-ups: some holiday-themed nonsense from Jess and Kendall, some Firefly cosplay with Nic, and two new additions to Gert's burlesque act series. There's also a survey to help pick future pin-up stuff! (Plz note that the pin-up stuff skews older than S&F proper and is often nsfw. It's not going to, like, screw you up or anything, though.) 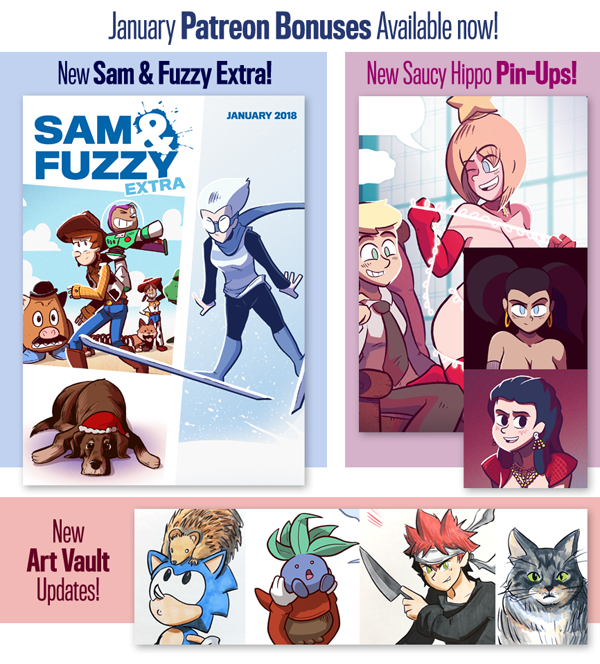 Sam and Fuzzy Q & A:  Rex Edition
Got a question you want answered? Just drop me an email with "Q & A" in the subject line!

"Now that we're going into Rexford's past, I'm wondering whether he has any sort of personal life? I know Rex is the workaholic type, but he has to have something to do when he's not cleaning up after everyone's mistakes." -Yarrun

Rex certainly has his secret interests outside of his "official" Committee and corporate dealings, but it's all a part of the same big picture. He's obsessed with his vision for the world, his role in it, and his responsibility to it... almost everything he does is to further his agenda or expand his influence. (And as we're seeing in the current story, he's very disconnected from whatever life he might have had before those things took over.)

I think the closest Rex gets to taking time for himself is allowing for small vanities like the retrieval of his old missing tooth.

"Why is that Committee member in panel six of this comic wearing a top hat -- originally popularized in the 1700s—when the rest of the Committee is garbed from the Elizabethan Era? Is the clothing of the Underground (much like the technology) significantly more advanced and fashionable than that of the surface? Is that style of hat a personal invention of that Committee member? Did his fashion choices influence the stylistic decisions of the Committee's status quo enforcement centuries later?" -Dawson

That's not actually a top hat! It's a top hat-shaped growth. The top hat was originally created when a hatmaker misinterpreted a portrait of that Committee member centuries later. True story!

In seriousness, I threw it in there because I wanted it to be a little vague about exactly when this flashback took place. I don't want to get too bogged down with the specific dates and details of the S&F universe's alternate North American history, because that's not really the sort of comic I'm writing here. But yes, as most of the clothing would suggest, my thinking is that this is sometime in the late 1500s or early 1600s.

"Your "weekend breaks" between comics seem to always be perfectly timed cliffhangers. Are you conscious of that when you're planning a run?" -Lee

Honestly, not really! But it certainly seems to happen a lot, so... maybe it's unconscious? Then again, I suppose with my update schedule, any crazy cliffhanger that crops up has around a one in three chance of landing on a Friday. And I do tend to have a lot of cliffhangers to spread around!