May Patreon Rewards Out Now!

Things in the comic are pretty stressful right now! So it's been kind of funny simultaneously prepping lots of lighthearted bonus goodies for Patreon this month! 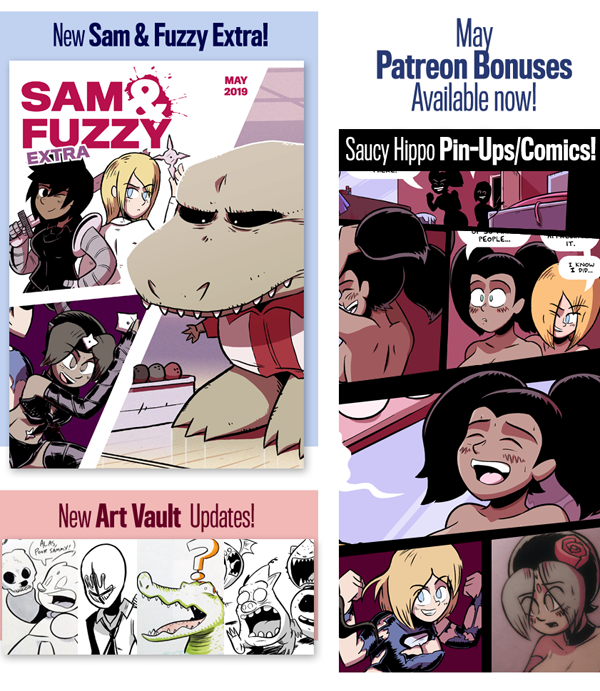 Do you like goofy stuff? The regular tiers are packed with bowling dinosaurs, alt-universe ninjas, and comic cosplay! Do you like racy stuff? The Pin-Up Vault tier got several new nsfw goodies, including the particularly steamy finish to our comic about Gert and Jess' early days at the Saucy Hippo.

And of course, in addition to securing fun bonuses, backing the Patreon also supports this here comic, and helps me continue to deliver this traumatizing narative content three times a week. So if you dig what I'm doing here and want to help out, it's much appreciated!

We return on Friday with our next comic! And while we do, I'll be flying to Toronto for this year's TCAF! See you there, Torontonians.

I think this has gotta be the lowest ratio of black in any single Sam and Fuzzy comic.

Sam and Fuzzy Q & A:  Next Edition
Got a question you want answered? Just drop me an email with "Q & A" in the subject line!

"I was archive diving and read through the Edwin story. The Q and A at this comic was pretty amusing... Danny was worried about the end of the comic nearly 10 years ago and it's still going! I don't really want to see it end but I can tell we're reaching that point sooner rather than later (certainly not 10 more years). Do you have any more idea about what's next, or have you not really thought about it?" -Alan

Well, immediately after our current story ends, what you'll probably be seeing here next is some shorter stories and stand-alone comics! I think that will be a nice way to kind of cleanse my pallette, experiment a little, and give myself some time to plan my next larger storyline. Some will focus on familiar faces, while others will probably feature some new ones.

That said, I do have a couple ideas that I've been kicking around for my next big story! Some are new stories in the S&F universe, while others are totally unrelated. At this point, I'm still undecided which one I'd like to do first. I don't want to start working on that stuff in earnest until our current saga finally wraps up.

The one thing I'm pretty sure you will not be seeing in the forseeable future is another giant story staring Sam or Fuzzy specifically.  Even in future S&F-universe material, I'd like to focus on some of the other characters!

"Building off of that last question [from our previous Q&A], now that I have a little more understanding of how tar works... How was Brain/Hart able to make Hazel into a (partial?) Inhuman?" -Airyu

Brain's suggests it was a side effect of long term exposure to him. He spent decades regularly editing her memories and imbuing her with tiny pieces of his tar form so that he could track her. Brain theorizes that all that tar exposure left her with enough traces of it in her body to give her the same vulnerabilities as tar-based creatures like inhumans. He's only guessing, but he's probably in the right ballpark.

"How do the buddy bots charge? Or do they have some type of super energy source? Or am I over thinking it?" -Joseph

Like all the robot characters, the Buddy Bots are charged up by the S&F universe's most powerful resource: narrative convenience. (I actually have no idea.)

That's a wrap for this week, friends. But come back on Monday for our next comic!

Building off of that last question, now that I have a little more understanding of how tar works... How was Brain/Hart able to make Hazel into a (partial?) Inhuman?