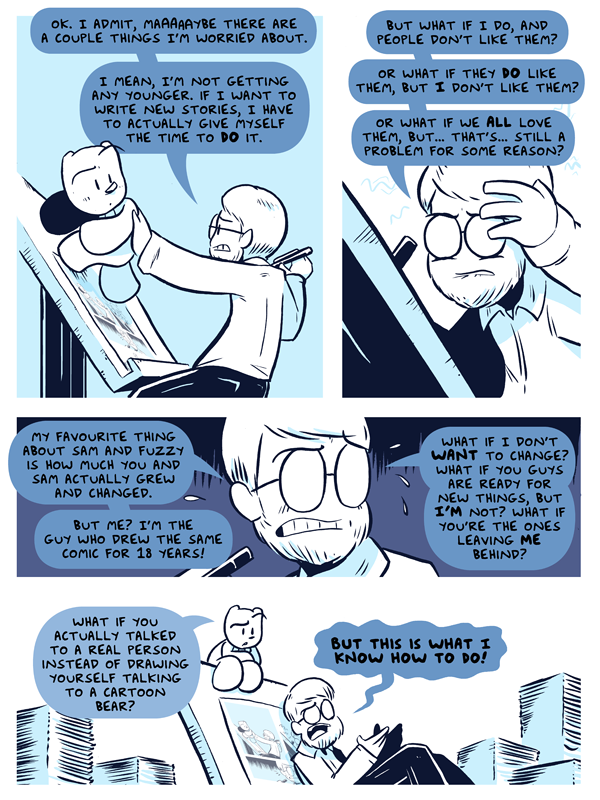 Americans! If you're hoping to order some of my swag in time for Christmas, I've just posted the holiday ordering deadlines up in the top right corner of the site!

Non US friends... I'm afraid all the deadlines for international shipping have now passed! But if you'd like to give someone a slightly late gift, you can always alert them of its incoming awesomeness with our traditional printable "It's not here yet" Christmas card:

We return on Friday with the last comic in this little autobio miniseries, and a new round of Q and A! As always, if you've got a question for me, just pop it in an email with "Q and A" in the subject line.

Come back on Wednesday for our next comic! There are two parts left of this little auto bio comic, and then a new story will begin on Monday! That's right, only two comics to finish resolving all my internal conflict. Fuzzy is very efficient.

And thanks again for all the kind words about Sam and Fuzzy! You guys are the best.

Sam and Fuzzy Q & A:  New Era Edition
Got a question you want answered? Just drop me an email with "Q & A" in the subject line!

"Are full book sets of the entire storyline available yet? If not, then when? (by Christmas?)" -David

You can get books of all but the final volume of the series on Topatoco! Omnibus I and II collect the original Classic and Noosehead series, while the first 5 volumes of the NMS Series (the most recent storyline) is collected in either three omnibuses (III, IV, and V) or five softcovers (Volume 1-5).

I'll be launching a kickstarter for the final volume in the near future... probably in January! It is very long, haha! I might actually need to split it into two books... I'll find out when I've finished the layouts!

"Congratulations on being among the very few cartoonists to have launched such a long, ambitious story arc and pulled it off. I was wondering if there was any chance we might get to see Fuzzy's book, or at least read some excerpts?" -T Campbell

Thank you, T! (You would know a thing or two about pulling off giant story arcs yourself, haha!)

I don't have any plans for that book, but never say never! I think it's fun to leave most of it to the imagination, but maybe an excerpt or two could make a good bonus feature for our next Sam and Fuzzy book collection.

"Question: So is that the end of the Black and White era? I note the distinct addition of A BLUISH INK" -Joe

I think going forward, I'm going to be more open to picking different styles or color pallets for different individual stories. But you will definitely still see some in black and white, too! I have a real soft spot for that look.

"I’ve noticed that you have a lot of burlesque references and that carries quite a theme through the story.  I am a huge fan of burlesque, and have managed to perform a little and even played in the house band for a local troupe (in Alaska) and I love your use and portrayal of BQ.  What is your personal connection to burlesque?  Are you just patron of the sparkly arts? Or do you or a close friend or partner perform?  I’d love to hear about the BQ scene in your part of the world."
-Tippsily Pleasant

You know, I haven't really sat down and considered this before, but I guess at this point I actually have a lot of friends who work or have worked in burlesque as performers, hosts, and/or costume designers. There's a pretty healthy scene here in Vancouver, but it's also just a frequent component of all the comic and gaming conventions I go to! There is a surprising amount of overlap between the pop culture convention community and the burlesque community, and over the years I have made a lot of pals involved in both.

But the truth is, burlesque stuff shows up in my work mainly because I just think it's cool! In the comic, it felt like an appropriate underground business empire for Gertrude to helm. And outside of the comic, it just felt like a good  direction for my own pin-up art, especially when I was first starting out. I like all sorts of pin-up stuff, but as a comic person, I'm just sort of naturally drawn towards doing sequential work and character-driven stuff. Burlesque performances were a fun way to infuse my pin-up sets with little narratives and put a little extra emphasis on personality.

At this point, I've drawn quite a few of those burlesque-inspired sets! (There are six full striptease sets, plus six shorter ones from my old Headcanon pin-up ebooks, in the Pin-Up Vault of my Patreon.) And although in recent months I've kind of pivoted more towards drawing actual full sexy comic stories, I still draw a new one from time to time. (The most recent was the "Goth Dev" set that I drew for Inktober last month!)

That's a wrap for this week, team! But come back on Monday for another new comic. See you then!