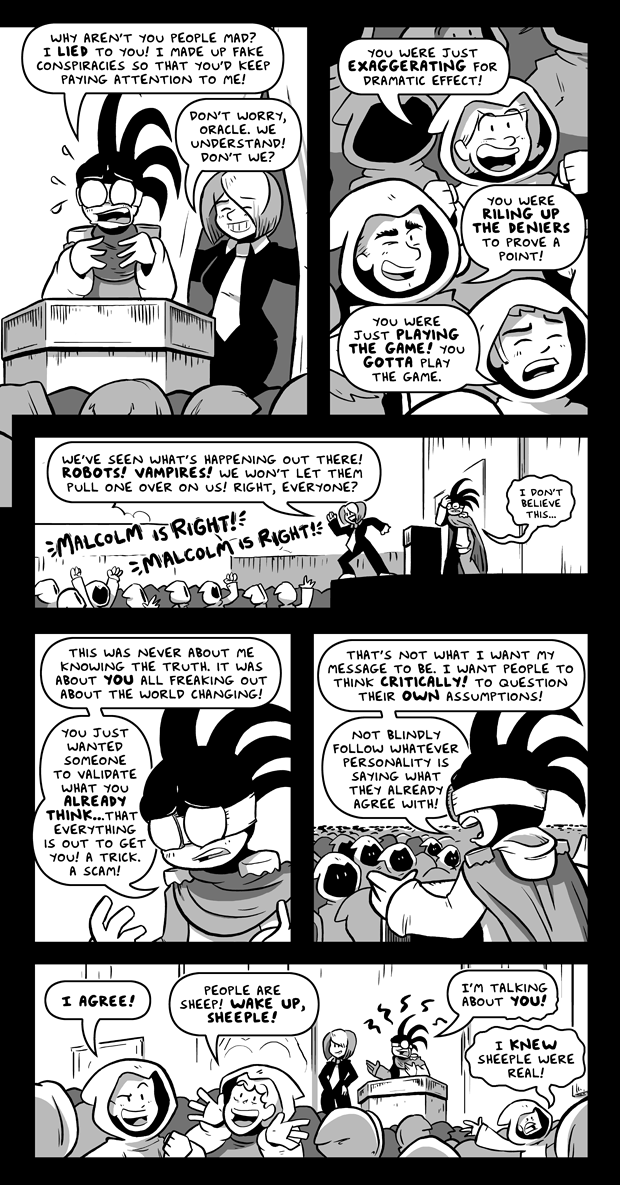 Sam and Fuzzy Q & A:  Maker Edition
Got a question you want answered? Just drop me an email with "Q & A" in the subject line!

"So, with this new Mario Maker map thing, can we expect you to make a whole world of levels about murdering Yoshi?" -Cameron

Haha! Man, joking aside, that new update (which lets you make Mario World-style overworld maps to house all your levels) is super enticing to me. I would love to build a whole game's worth of stages. I never will! But I'd love to. Ha!

I can't remember if I've ever mentioned this here, but I actually used to make my own platforming games when I was a teenager, using a computer program called Click and Create. For a while, I spent more time doing that than drawing comics! But as I got more serious about Sam and Fuzzy, I kind of left my game making behind. The same thing happened to my music writing, which is something else I used to do a lot of. There are just only so many hours in a day, I guess!

For me, Mario Maker is a fun way to scratch the level design itch that Click and Create used to. But even though it's the fastest possible way to throw together a level, it still takes me a long time. So as cool as that world map-building feature looks, I doubt I'll ever have enough finished stages to fill a whole game's worth of maps. But maybe one or two, eventually...

On that note... I did manage to make one new stage! This one is about moles and capes, and is more of a chill, moderate-diffculty level than some of my previous ones.

I made a new Mario level! It's about exploring mole tunnels until one mole gets ticked off
69W-FSF-GSF#SuperMarioMaker2 pic.twitter.com/utbyRR6dF4

And for those who missed 'em, here are some of my previous levels. (Which earned me my reputation for Yoshi murdering.)

I like games that present the player with complex, meaningful moral choices. (XKT-JCS-5LG) pic.twitter.com/gwyabFOt9M

"How long did Kate Sanders intern for Mr. Sin? Was she running around in the background during the whole Noosehead saga?" -Emily

I actually feel like I should not say much about this! I am pretty sure I know the answer, but I would like to save the details of her backstory and working relationship (or lack thereof) with Mr. Sin for potential future comics. But you can take this answer as a sign that I would like to have her show up again outside of this story.

"On the Fridays when you "claim" to have "forgotten" to do a Q&A feature, it's actually that you haven't received any interesting questions right? You can't pull the wool over my eyes!" -Tom

Honestly, it's usually either because I am feeling too lazy to write the feature and want to give myself a break, or because I was working late into the evening on something else and didn't have time to write it.

That said, I'm sure that if there is a specific question I'm really dying to answer, I'm less likely to blow off writing the fetaure out of laziness. And there are some weeks where I don't happen to get any really juicy questions! But people often ask me questions on social media or Patreon or elsewhere, and I can often repurpose those questions when I'm short on "official" Q and A questions if I think other people will find them interesting!

We return on Friday with our next comic, plus a new round of Q and A! If you've got a question you'd like me to answer... about Sam and Fuzzy, comics in general, or anything else... just pop it in an email with "Q and A" in the subject line!

I know many of you are deeply, deeply invested in the ongoing sales battle between the two versions of my new Meow Meow shirt. Which one is more popular? The one that says "PAY ATTENTION TO ME: Meow Meow Meow", or the one that just says "MEOW MEOW MEOW: Meow Meow Meow"?

Well, the answer seemed clear pretty quick. "Pay Attention" outsold "Meow Meow" by a rate of 3:1. It did so for several weeks! Case closed. Or so I thought.

But friends, I just rechecked the data yesterday, and I have to share a shocking development. A twist so startling, so unexpected, it has challenged everything I thought I knew about the world. "Meow Meow" is now outselling "Pay Attention", and has for the past few weeks. As a result, they are now perfectly tied in total sales.

Why did this happen? Well, I can't really know for sure. But it has to be said: the shift in popularity from the one to the other was quite abrupt, and aligns pretty much perfectly with when social distancing started.

In other words, yes... "Pay Attention to Me" was more popular when people could leave the house and wear it around other people, and "Meow Meow" is more popular now that people are stuck at home with their cats.

OK, OK. Maybe it's a coincidence. Still, it's funny enough that I thought it might amuse some of you to know!

Of course, both versions of the shirt are still available to order. Get whichever one you like best! Buck trends! I support your decisions. (And come back on Wednesday for our next comic!)