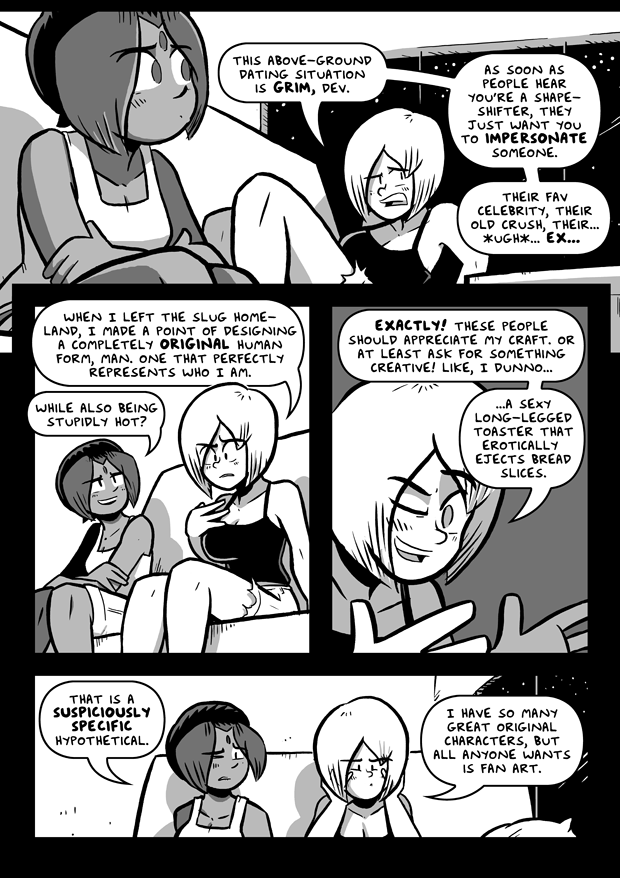 Sam and Fuzzy Q & A:  Fresh Edition
Got a question you want answered? Just drop me an email with "Q & A" in the subject line!

"When you write a series like Sam & Fuzzy, how did you make sure that the joke at the end of the page made sense story wise?" -Alexander

This is an interesting question! I think a lot of it has to do with tone. A certain amount of absurdity is just baked into the world of the comic and the rules of its reality. I think in that setting, the reader is willing to accept that characters are going to crack a lot more jokes mid-conversation than normal people, even as they deal with serious problems. And because there is absurdity and jokey banter laced throughout the comic, I think it stops the actual comic-ending punchlines from really standing out or feeling out of place.

As for how I manage to get a joke at the end of every comic, well... a key factor is that not all the comics are the same length! Most Sam & Fuzzy updates are somewhere between 1-3 pages. I try to end each update on a satisfying emotional beat -- if not a joke, then a surprise or a scare or some other kind of natural stopping point. But because the updates vary in length, I can place those beats where they make sense, rather than being forced to place them every four panels.

"How long you gonna keep us 90s kids waiting for that Fresh Loaf t-shirt? Don't bogart the freshness, my dude!" -Charles

Not long at all. You can get one right now! The Fresh Loaf was a rare case where a shirt brainstorming session accidentally gave me a bunch of ideas for fun comics. (As opposed to the usual situation, where a comic brainstorming session accidentally gives me an idea for a shirt.) I love this cool boy, and had a lot of fun making this week's comics. But then, I too am a 90s kid, after all!

"Do you have a corgi of your own?" -Alice

I do... Dipper! Little dip is a sweet boy. But he is not a loaf at all! He is very long and skinny for a corgi, so he's really more of a noodle. He's also a tri-colour, unlike Baker. (Baker was actually created before Dipper was born!)

No one showed up to Dipper's board meeting again https://t.co/eD0KmvMR2a pic.twitter.com/6JIIIpynBH

That's all for this week, team. But come back on Monday for a new comic!

when you write a series like Sam & Fuzzy how did you make sure that the joke at the end of the page made sense story wise?