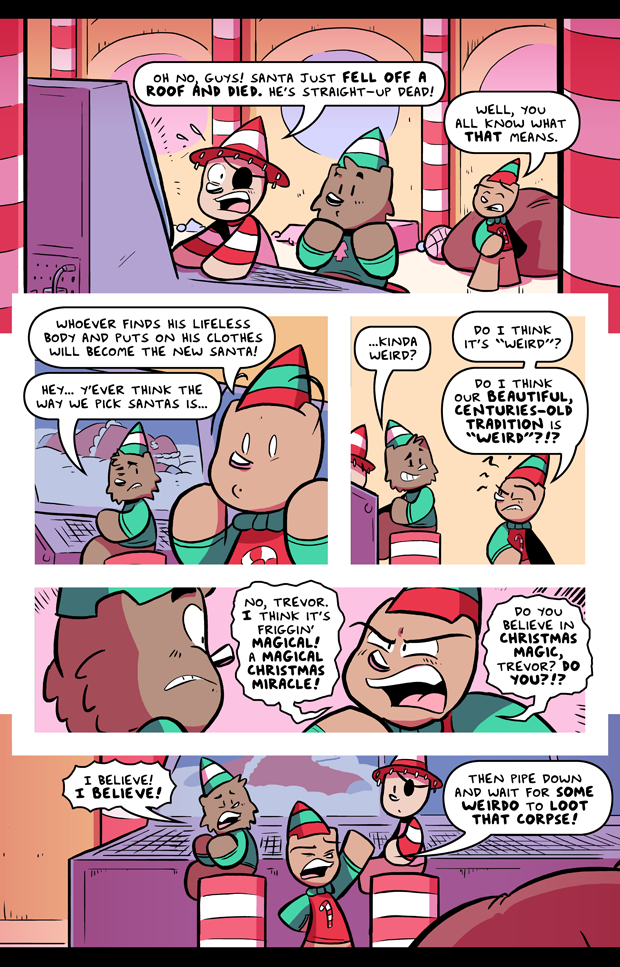 (Just a reminder for the folks backing my pin-up art tier on Patreon: today is the last day to submit piece ideas for this year's Saucy Hippo Secret Santa draw!)

Sam and Fuzzy Q & A:  Ten Year Edition
Got a question you want answered? Just drop me an email with "Q & A" in the subject line!

"All the webcomics I follow are comics that I started following 10 years ago or more. What are some of your favorite newer ones?" -Alex Jaffe

I really like Barbarous! Yuko and Ananth have been doing webcomics for ages, but Barbarous only started in 2016, so it definitely counts. I'm also really enjoying Speak of the Devil.

But I know there is a whole giant world of newer webcomics out there that I've never read! I'd love to hear what some of your favourite "newer" webcomics are, readers.

"Is there a lot of political pressure for equal rights and citizenship for the folk from The Underground?" -Matthew

Absolutely! We'll learn more about this as the story continues. We'll also learn what the current rights and citizenship status of inhumans actually is. (It is not the same for each species of inhuman.)

I will say, one thing I don't really want to do is use "inhuman rights struggles" as a broad, generic allegory for real world prejudices like racism, sexism, or homophobia. Race, gender, and sexuality already exist in the S&F universe -- they even exist within the various inhuman communities -- so I don't need a clumsy metaphor to write about those things. Being inhuman is its own distinct thing, with its own distinct problems and challenges. We'll explore some of those in the future! (Albeit in a relatively absurd way... this is still a comedy, after all.)

I'm running a little behind today -- it's 12:30 am as I finish writing this, haha -- so I'll leave it at that for now! But come back on Monday for our next comic.

Municipal politics are important! It's where a lot of pressing issues are dealt with. (And also, pigeons!)

We return on Friday with our next comic and a new round of Q and A! As always, if you've got a question you'd like answered, just pop it in an email with "Q and A" in the subject line, or hit me up on twitter.