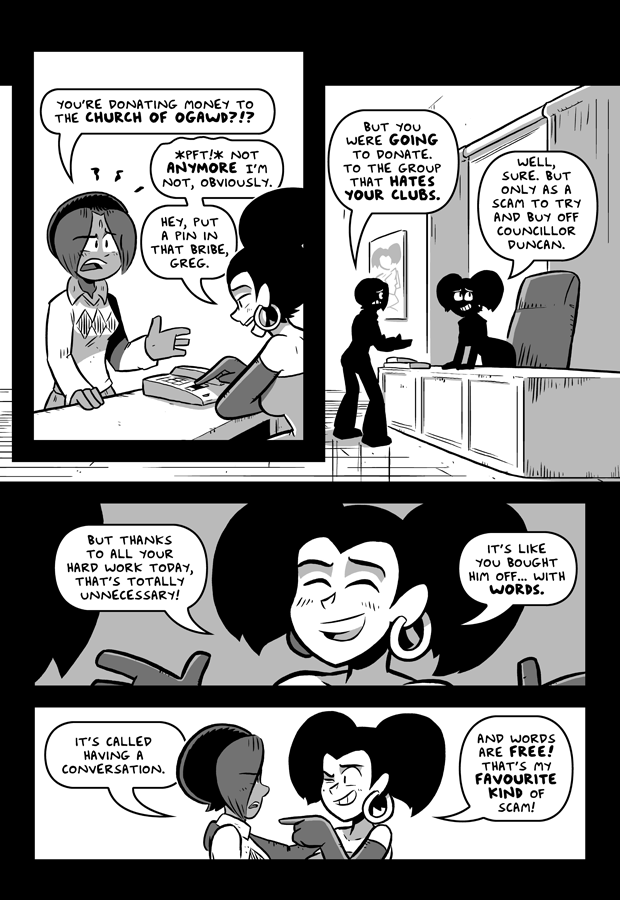 Sam and Fuzzy Q & A:  Ruby Edition
Got a question you want answered? Just drop me an email with "Q & A" in the subject line!

"Have you written any more Invader Zim stories?" -Gir

Hey, you're not the Gir, are you? Sorry for putting words in your mouth.

But yes! I wrote the upcoming Invader Zim Quarterly: Zim's Greatest Plan! It comes out in March, and features art by my bud (and S&F Vol 6 & 7 softcover cover colorist) Fred C. Stressing!

I'm very proud of the story inside -- it's one I've wanted to write for some time. I'm very flattered that it is being marketed as Zim's Greatest Plan, but my personal name for the story is actually... Zim Teaches Typing. (No one wanted to print that title on the cover for some reason.)

"Is Ruby any particular kind of elf, like a night elf or a drow?" -Max

Just an elf! All the S&F universe's elves are just elves. They can have different ethnicities, but they're the same variety of ethnicities as humans. I think the only other elf who has appeared in the comic is former Committee member Craad Gaaughlaglan. (I don't think he was ever named in the comic, but I wrote about him and the elves for the S&F Universe Guide in the Underground RPG.)

I'm not a super big fan of the fantasy trope of dividing elves up into racially segregated socities -- especially when the dark-colored ones always wind up being "evil" --  but I feel like it especially wouldn't make sense in the context of the S&F universe. Like other inhumans, Elves were accidentally created when tar reacted to the ambient thoughts and imagination of nearby humans. If elf inhumans were inspired by european elf mythology, they probably have not been around for more than 1000 years. And for most of that time, they would have been motivated to band together with each other (and other inhumans) to hide from the human world.

Fun fact: according to the Underground RPG, elves were actually the first inhuman species to move underground. In the book, I called them "Cave Elves", but only really to set up a joke about how long they'd been stuck down there. I feel like they probably do not use the term "cave elf" themselves. (Especially now that they don't have to live in caves.)

"Is there any particular reason why Ruby was missing from the cast chart?" -Kelly

Honestly, it's just because at that time, she had only appeared once in the distant background of one scene, so I didn't have any nice clear finished artwork of her face to use for the chart yet. (Alicia had only been in the background too, but she and Vulfie had actually both shown up earlier in a bunch of my Saucy Hippo Patreon tier stuff, so I was able to use some of that artwork for their icons.) Ruby is the main reason I left a "?" space in that column --  she's not the only Saucy Hippo employee missing from that chart, but of the ones who are, she's easily the most "important".

I should probably go back and add Ruby now that she has been properly introduced! You'll be seeing more of her in our next big chapter.

That's all for this week! But come back on Monday for our next comic. Woo!

Patreon backers! A new month's worth of rewards are available now on my Patreon page! There's a brand new bonus comic for all backers, and a bunch of exclusive art and behind-the-scenes stuff for Extra and Art Vault tier backers. And for folks who like my "nsfw" work, Saucy Hippo tier backers got 9(!) new nsfw comics and illustrations this month, including a new Cynthia burlesque set. Woo!

That's all for today, team. But come back on Friday for our next comic, as well as a brand new Friday Q and A column! If you've got a question you'd like me to answer, just pop it in an email with "Q and A" in the subject line. (Or tweet it at me.) See you then!

Bowser's Fury week! Did you know that I am super excited for Bowser's Fury? Because I sure am.