The most 300th comic ever

Yes, only a couple of weeks after the website's two-year anniversary, Sam and Fuzzy has reached its 300th comic. For this reasonably special occassion, I have put together a wallpaper you can download. My original plan was to scrunch every single one of the three hundred strips into the background, but since that made them totally illegible, I opted instead to pick a few dozen or so of some of my favourite panels. You know you're a fan when you can identify every single one. 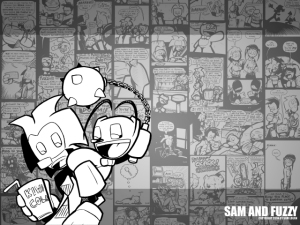 Consider this little gift my way of helping you all celebrate. And if you're dying to repay the favour, now is as good a time as any to help spread the word and unleash my comic on your hapless friends and coworkers.

I can't believe there are actually 300 of these things!

...hyperlink to my bud Jim Doe's webcomic, Roll of the Di, which has just reached its fiftieth strip. Congrats, Jimbo!

I hope you all enjoyed getting your Sam and Fuzzy fix a couple of hours early this time. I just know that if I have to turn my computer back on in a couple of hours to do the update, I'll end up wasting hours mindlessly browsing the net instead of doing something productive. Anyhoo, tune in on Monday for the 300th Sam and Fuzzy site update ever -- another arbitrary anniversary for which I have nothing special planned. Rock on.

You can kill the lizard

Whew! Even though I draw the comics themselves weeks in advance, I usually save the computer "touch up" work until immediately before they run on the site. And like I said once upon a time in the tutorial, most of that touch up work is editing the dialogue text to make my printing legible.

Well, let's just say that today's strip gave me a heck of a workout. Maybe it's time for me to make the move to a computer font -- I think it might actually be faster! It'd have to be a font based on my own printing, though. Comics that use regular computer fonts just... never look quite right to me. But that's because I'm so OLD SKOOL.