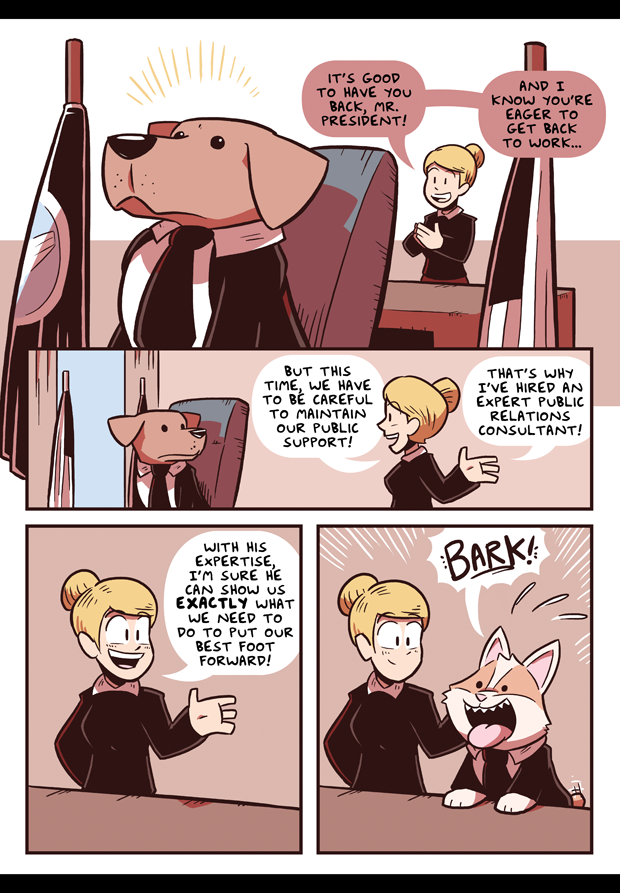 Yes... it's the first ever meeting of President Dog and Baker! Today's comic is part one... the second (and longer) part will go up here on Monday.

This comic originally appeared in my Vote Dog book, but I'm sharing it online for the first time now. If you like my Baker and President Dog comics, I really recommend you check that book out! I had a lot of fun making it, and I'd love to publish a follow up collection of some of my newer dog comics in the future.

Come back on Monday for part 2!

Here's a little project I've been plugging away at off and on over the last couple of years on my Patreon... drawing a big series of "Platformer" video game characters!

This montage features the first 50 drawings I made! If you'd like a detailed breakdown of who's who, you can find 'em all in this twitter thread. But I encourage you to see how many you can identify first! I pulled characters from throughout all of video game history -- from console, arcade, and PC games. Some of the characters are quite famous, while others are pretty obscure!

I'm still poking away at this project here and there... there are actually another 10 or so that I've already drawn, which I've been sharing with Patreon backers over the last couple of months. And I am sure I will make more when the mood strikes! It's a silly little passion project, but it is my favourite genre of video game. (And yes, in case you are wondering... I have played all of these games at least a little, haha!)

See you on Friday, team!

And now you know!

This is a spin on an extremely stupid joke that came up with to torment my friends at a con a few years ago. First time I've ever drawn it "properly", though. ENJOY.