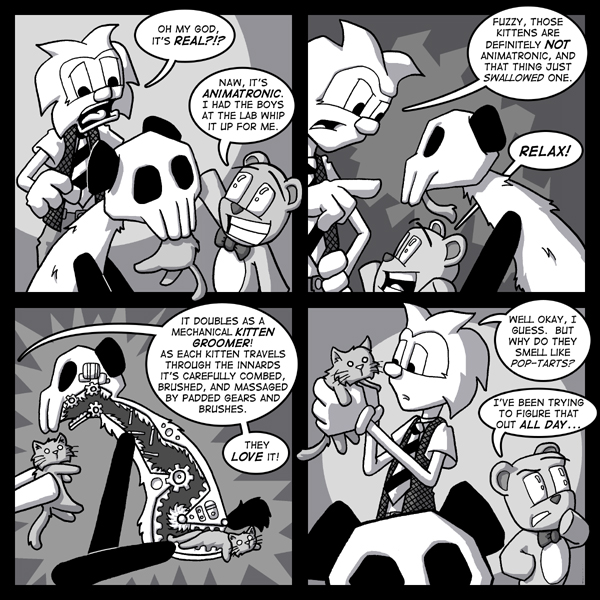 Yes, today is the last day to order I'm Capitalism and I'm Communism shirts, as well as all hoodies, babydoll and long-sleeved ts in our other designs. Today is also the last day you have to hear me talking about it. Excitement!

O-GAWD continues today with a double-dose of Skull Panda madness! First, Eric A. Johnson, the man behind the skillfully crafted and perversely amusing Radioactive Panda, ushers Skull Panda into the real world... uh, sort of. Eric's comic may be new to you, and that's a shame. You should already be reading it. I mean, seriously!

Continued on next archive page

The crossover event of the... uh, November... arrives today by way of Questionable Content's Jeph Jacques. Jeph and I have been talking about doing this ever since Aido noticed a few similarities between our strips. But despite my best brainstorming back when I was trying to make a guest strip for QC, I never did figure out a good way to do it. So, Jeph has stepped up to the plate! HUAH!

Tommorrow's update will bring not one, but two killer guest strips. It will also be the last day to order the Commie/Cap shirts and Panda/Ninja/Classic non-t-shirts, as you've probably figured out by my constant yammering on the subject. See you then!

I am Jack's smirking revenge

Today's absolutely gigantic guest strip comes by way of Ryan Estrada -- a man who already held the "longest-guest strip ever online" record before breaking it again with this one. I would love to tell you all about this incredibly talented man and his awesome website crammed with great comics, but the first rule of Ryan Estrada is that you don't talk about Ryan Estrada.

I had to chop out my usual shop promotion banner above the strip to make room for giving all these talented guest artists their props. I hope that the smaller banner in the top right is eye-catching enough! But just in case, here's another reminder that these are the last three days to order I'm Communism and I'm Capitalism shirts, as well as all hoodies and babydolls in the other three designs. See you tommorrow with another guest strip!