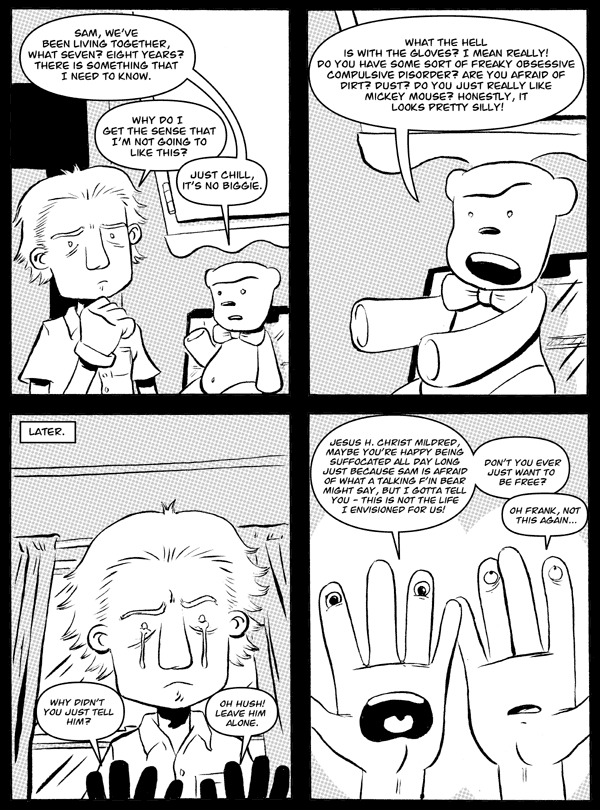 Mr. Grisolm has been getting a lot of press over the last few months... if by "press", one means "plugs from various webcomics." Well, there's a good reason for it. Fred is paying us a grand each! Also, he's incredibly talented. Of all the comics I read for the first time last year, Hate Song is probably my favourite. People often link to it with an "adult content" disclaimer. But honestly, if your sanity managed to withstand the assault of these last three guest strips, I'm pretty sure you can handle Hate Song, too.

When I hung out with him last week, Fred pointed out something interesting about all the guest comics folks have done for Sam and Fuzzy, and in particular, how Sam has been drawn. Some replicate his almost alien-looking character design exactly -- the square nose and bug eyes and pipe-cleaner arms and so on. But other artists just draw Sam like a normal guy -- that is, they draw him in whatever way they normally draw human beings, with just enough of his visual traits to make him recognizable.

I don't really have anything meaningful to add to that thought. I just think it's interesting!

O-GAWD is almost over, but I've still got a double dose of guest strip action to let loose on you all tomorrow. See you then!


Reach for a drink when you're in cola land

I'm not sure, but I think Jon's spin on Sam and Fuzzy is even more frightening than Josh's! You may have seen Mr. Gray's hyper-cartoony stylings before in one of two places: on the intertron, where he publishes a pair of original webcomics; or on paper, in the pages of the Archie-published Sonic the Hedgehog comic. But if his work is totally new to you, I defintely recommend checking it out. He's a talented man!

Not much else to report today. These daily updates are playing havoc with my momentum. Apparently, I usually only have interesting things to talk about three times a week!


How much could a banana cost? Ten dollars?

You can thank Josh Lesnick for scaring you emotionally with today's strip. I've been a fan of Josh's work for ages, so it's a thrill to finally see his unique vision of Sam and Fuzzy. His twisted, unique vision.

Josh doesn't know it, but he's also one of the main reasons I finally started watching Arrested Development last week. I'd never seen it before because I don't have cable, but since he and several other people praised it so highly, I took a chance and picked up the first DVD set when it was on sale at Costco. Well, guess what? It really is as brilliant as everyone says it is!

I'm not exactly sure how a show this hillarious could have so much trouble finding an audience on TV. People must not even be giving it a test-view. It's probably the name. "Arrested Development" sounds kind of intimidating. I can't think of a single hit show that has a four-sylable word in the title. "Rich Idiots" would probably be less challenging. Maybe they could even compress it into a single word, like "Richiots".

Man, Fox should totally hire me to handle this kind of stuff.