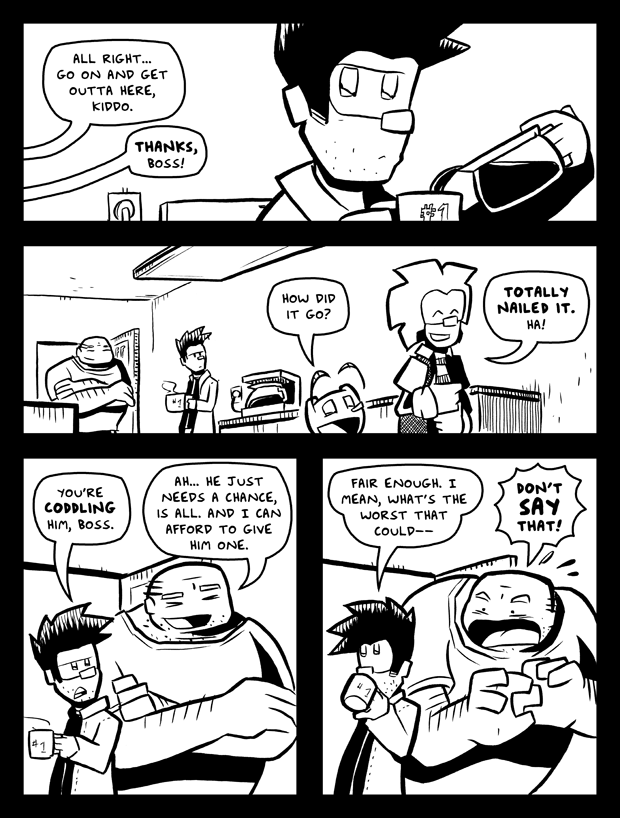 Ackerman's growing internal conflict about whether Sam needs support or tough love winds up coming to a head in the mega-important Performance Anxiety story -- the story that introduces the Ninja Mafia and ends Sam's career as a taxi driver for good. So, it was fun to give those themes a smidge of extra setup in this retroactive intro story.

A bone to pick

Mr. Ackerman's original design -- which I did my best to recreate accurately in this story -- always reminds me of how much I was into Bone back when Sam and Fuzzy first started. Ackerman's general body proportions were definitely inspired by Lucius, as best as I could recreate them in my own art style. (And of course, Fuzzy's eyebrows were inspired by the Bone characters!)

The Bone series is one of my all time favourite comics, and the final two volumes were released while I was working on the first two years of S&F. So it was very much at the forefront of my mind at the time.

Anyhoo, come back on Monday for our next comic, team!

It's Lance! Is Lance the only character in S&F who is a canonical smoker? I honestly don't remember.

I like how this comic pokes fun at Sam's old-fashioned-cartoon-character gloves... something that would only seem weirder and weirder as my art style evolved. (Which is why he eventually lost 'em!)

In other news, I've drawn a few more new inked drawings! I've been posting them to my twitter... here's the most recent ones:

Calamity Anne (by way of Super Sonic). Been thinking about drawing this ever since the #amphibia s2 finale pic.twitter.com/9ZYInmViqG